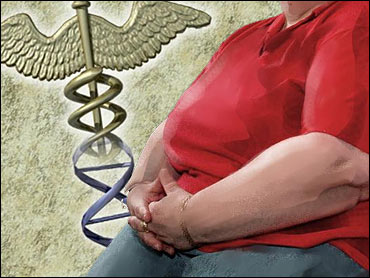 It turns out some couch potatoes spend more time on the couch — or their desk chair — than others. And that could be a key to obesity.

Researchers at the Mayo Clinic believe it's not the trips to the gym, but the everyday pacing, fidgeting and restlessness that may play a bigger role in whether someone's fat or thin, according to a small study of self-described couch potatoes.

The scientists found that the obese people they studied sat for about 150 minutes more a day on average than their lean subjects, and that meant they burned about 350 fewer calories a day.

The researchers looked at the role of routine activities such as sitting, standing, walking and talking.

If the overweight subjects could match the behavior of their lean counterparts, that could work out to a weight loss of about 33 pounds a year, the study said. And it's not necessary to go to the gym to do that. He spoke with CBS News Correspondent Elizabeth Kaledin about the benefits of a single movement: standing up.

"I think our study is a beacon of hope, because fifty years ago our biology was the same, but obesity was not prevalent in America," said the study's lead author, endocrinologist James Levine. "If we can revert to the activity levels of fifty years ago, we have the potential to reverse our obesity."

Levine, it should be noted, is no couch potato and certainly not overweight. He spoke while walking 0.7 mph on a treadmill in his office, where he's set up a computer above the machine so he can walk and work at the same time.

In fact, since doing the study, Levine rarely sits. He even insisted in talking with Kaledin standing up.

"This is amazing ... simply standing like this and moving a little bit like this doubles your metabolic rate."

Levine told The Early Show's Harry Smith this field of study is known as non-exercise activity thermogenesis, or NEAT. "It appears to be absolutely crucial in obesity," Levine says. He and other researchers at Mayo outfitted study participants with the same kind of sensors that control fighter planes. Kaledin reports that these sensors are so sensitive that every twitch was captured and recorded.

When Smith asked for a simple prescription stemming from this research, Levine replied, "Just get up. Use your creativity to find ways throughout your day. Take that longer walk home, for instance. Rather than having a meeting with your boss, which you're not going to get anything out of, go for a walk with him or her. It's a matter of looking at our days constructively and finding a completely new way of living."

Levine added that he's not talking about adding actual exercise to routines. As he put it to Smith, "Not necessarily getting on a treadmill, but being naturally more prone to be active. And so the question then becomes how can we translate this into everyday life? And here, we're doing it now (walking slowly on treadmills together during the interview). We've converted your work time into an active time, and it's a matter of looking for those opportunities all our lives throughout the day."

The researchers recruited 10 mildly obese and 10 lean people to wear special underwear, which used technology developed for fighter jet control panels. Sensors embedded in the undergarments recorded their postures and movements every half-second, 24 hours a day, for 10 days.

The underpants look like bicycle shorts; the tops resemble undershirts for the men and sports bras for the women.

The volunteers went about their normal lives except that they ate all their meals at a Rochester hospital, scraping up every speck to leave no calorie behind.

Some 150 million lines of data were collected. Levine said it's the first time so much hard data has been compiled to show the different activity levels between lean and overweight people.

Levine said NEAT has become so hot that he envisions the next decade will see much more emphasis on it, leading to "a world of activity and happy, active people."

The Mayo study was reported in this week's issue of the journal Science.

Mark Pereira, an obesity researcher at the University of Minnesota who wasn't involved in the Mayo study, called it a significant step in nailing down the role such activity in obesity. He said the results from under- and overfeeding the volunteers provides good evidence that some fundamental biological characteristic is at work.

His colleague in the university's epidemiology division, David Jacobs, said it's useful to have such hard data because people typically don't have an accurate idea of how much they move or don't. "The ability to separate movement from non-movement is a critical issue," he said.

Jacobs also cautioned that there's no simple answer to the problem of obesity, and that a lot of other factors contribute, including overeating. But he said other research also has shown that overweight people tend to conserve their movements.