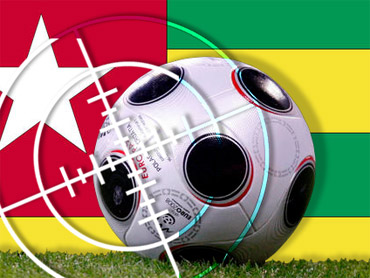 Gunmen in an area plagued by separatist violence used machine guns to open fire Friday on a bus carrying Togo's national soccer team to a tournament in this southwest African country, killing the driver and wounding at least nine people, including two players.

Some players said they wanted to pull out of the African Cup of Nations tournament following the violence, but an official in Angola said it would go ahead as planned.

Togo's bus in a convoy from Congo was six miles across the border in Angola when it came under fire. The bus driver died in the 30-minute ambush, according to Togo captain Emmanuel Adebayor, who was not hurt.

"We were machine-gunned like dogs," Togo player Thomas Dossevi, who plays for French club Nantes, told Radio Monte Carlo. "They were armed to the teeth ... We spent 20 minutes underneath the seats of the bus."

The wounded were taken to a hospital in Cabinda, and Portugal's state-run Lusa news agency said it received a communication from the region's main separatist group, FLEC, claiming to have carried out the attack.

Human Rights Watch called the apparent rebel attack "shocking." The New York-based rights group said a 2006 peace agreement between Angola's government and a faction of the separatist Front for the Liberation of the Enclave of Cabinda was supposed to end conflict in the area, but "sporadic attacks on government forces and expatriate workers have continued."

In Togo, the government put the total number of injured at nine, and said the slain driver was Angolan.

Togo said it was dispatching a delegation to Pointe Noire in Congo, where the Togolese team was holed up.

Togo Football Federation vice president Gabriel Ameyi said the team should have flown to Angola instead of traveling by road. He said defender Serge Akakpo and backup goalkeeper Obilale Kossi were among those hurt.

FC Vaslui said on its Web site that the 22-year-old Akakpo, who joined the Romanian club from Auxerre last year, was hit by two bullets and lost a lot of blood but was now out of danger.

Midfielder Alaixys Romao felt Togo should not go ahead with the tournament.

"If we can boycott it, let's do it," Romao told French TV channel Infosport. "It's just not on for us to be shot at because of a football match. All I can think about is stopping this competition and going home."

Dossevi agreed: "We don't want to play this African Cup of Nations," he told Infosport. "We're thinking about our teammates - to be hit by bullets when you've come to play football is disgusting."

The 16-team African championship starts Sunday in Angola, with Togo due to play its opening match on Monday against Ghana in Cabinda.

Togo captain Adebayor told the BBC that a lot of players want to leave "because they have seen their death already."

The African Football Confederation (CAF) condemned the attack against the Togolese delegation and held an emergency meeting. A delegation of Angolan officials and a CAF delegation will go to Cabinda on Saturday, while the Angolan Prime Minister will meet CAF president Issa Hayatou "to take decisions to guarantee the smooth running of the competition."

FIFA also expressed "utmost sympathy" in a statement and said it expected a report from CAF.

A senior member of the local organizing committee, who spoke on condition of anonymity because he was not authorized to speak to the press, said the tournament would go ahead as planned. He said Ivory Coast, considered the top African team, arrived early Friday in Cabinda, where Togo was also to be based as part of Group B. Burkina Faso had been there since Jan. 2, and Ghana was the other group member.

Even if the tournament goes ahead, the attack was a major blow to host Angola.

Angola has been struggling to climb back from decades of violence, and its government was clearly banking on the tournament as a chance to show the world it was on the way to recovery. A building boom fueled by oil wealth has included new stadiums in Cabinda and three other cities for the tournament.

But Cabinda, Angola's main oil-producing region, has been plagued by unrest. Human rights groups have accused the military of atrocities and claim government officials have embezzled millions of dollars in oil revenue. The government has denied the charges.

The simmering violence in Cabinda is separate from a larger civil war that broke out after independence from Portugal in 1975. An anti-colonial war had begun in the southern African country in the 1960s. Major fighting ended in 2002.

Before leaving for the tournament, Adebayor was asked by British journalists whether he had any reservations about playing in the politically unstable Cabinda region of Angola.

"We were born in Africa so we know what it's about. Some people might be afraid which is normal, I can understand that. But I'm going back to Africa, to one of the countries on my continent, and I'm prepared for Cabinda. I will enjoy myself," the former Arsenal forward said.

English Premier League club Portsmouth, which has four players in Angola, said it was considering withdrawing its players.

"We have asked the (English) Football Association to ask FIFA how safe it is and to guarantee the safety of our players," Portsmouth spokesman Gary Double told The Associated Press. "Our players' safety is paramount, and if that can't be guaranteed the players should be sent home."

It was the second major gun attack on a sports team in less than a year. Several players were injured and six policemen were killed when gunmen opened fire on the Sri Lankan cricket team's bus in Lahore, Pakistan, in March 2009.

The violence also comes five months before the World Cup in South Africa, the first to be held on the continent. The biggest concern leading to that 32-nation tournament has been the security situation in South Africa, a country with one of the world's highest crime rates.

Togo, which played at the 2006 World Cup, did not qualify for this year's tournament in South Africa.
By AP Sports Writer Samuel Petrequin; AP Writer Ebow Godwin in Lome, Togo, contributed to this report.