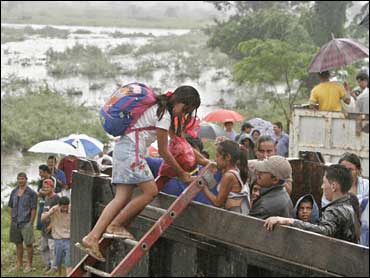 Doctors threw together a makeshift clinic Wednesday to tend to the injured after powerful Hurricane Felix flooded their hospital and wrecked villages on Nicaragua's Caribbean coast.

Remnants of the storm drenched Central America in rain as the death toll rose to 18 in Nicaragua, with at least 11 people missing and 60 injured.

Far to the northwest, Hurricane Henriette plowed into Mexico for the second time in two days, making landfall shortly before 9 p.m. EDT near the port city of Guaymas with top sustained winds of 75 mph. Seven deaths were reported from the Pacific storm, which hit Baja California on Tuesday.

Nicaragua was flying food and other emergency supplies to the regional capital of Puerto Cabezas, but said help had not yet reached villages cut off when Felix roared ashore Tuesday as a Category 5 hurricane with winds of 160 mph.

The dead included a man who drowned when his boat capsized, a woman killed when a tree fell on her house and a newborn who died shortly after birth because her mother couldn't get medical attention.

Among the missing were four fishermen whose small sailboat sank as Felix's center passed overhead. A survivor, Fernando Pereira, 24, said he clung to a piece of wood for 12 hours, despite a dislocated shoulder, and washed ashore at the village of Sandy Bay only hours after Felix made landfall there. He hadn't seen his friends since.

"I felt horrible," he said. "I was drinking salt water, and I thought I was going to die."

Others were caught in the sea as well. Jelivaro Climax, 22, said he had to swim through enormous waves to reach shore.

"Lightning flashed through a pitch black sky," he said. "I don't know how I survived. I swam with everything I had, and I was sure the sea would take me."

Felix swept over the Miskito Coast, an impoverished region where about 150,000 people live in jungle settlements. Their hamlets of wooden shacks and coconut groves are remote even in good weather, reachable only by air or flat-bottom boats.

The Miskitos, descendants of Indians, European settlers and African slaves, live semi-autonomously, much like people on Indian reservations in the United States.

There wasn't enough fuel after the storm for boats to make long trips, and Felix snapped steel cables that guided a small ferry carrying people and cars from Puerto Cabezas to the village of Wawahum.

Johana Aliberto Maquiave, 36, was stuck in Puerto Cabezas, trying to get back to her family in Sandy Bay, the village where the eye of the storm hit.

"I want to know what happened to my three children," she said, fighting tears. "The poor kids stayed with their dad. I am here with nothing. I came on Sunday to buy food."

Felix wiped out crops and damaged most of the 70 tons of food and emergency goods that had been flown in before the storm.

On Wednesday, it was hard to find a building that wasn't damaged. Puerto Cabezas' hospital was filled with water, and doctors attended to the injured at an improvised clinic.

Nicaraguan President Daniel Ortega flew over the area to survey the damage. He said that the United States and Venezuelan offered aid and that Cuban doctors were already on the ground. Nicaragua's military flew in sheets, mattresses, food and first aid materials.

Residents hacked at fallen trees with machetes, trying to uncover the remains of their humble homes. There was very little electricity, running water or telephone service.

Larry Hansack, 38, gazed at a sea littered with splintered wood and shattered tin, wondering about his nephew, a fisherman who disappeared at sea. "There's no one to help me, and everything is disorganized," he said.

Teresa Flores, 34, rode out the storm at a neighbor's house after her wooden home collapsed, injuring her husband and 3-year-old son. Looters later took what was left.

"They took the clothes, even the barrels where we keep water," she said. "Now we have nothing to drink. We lost all our food, the television set, the microwave, even the toilet. Nothing works. We are pretty much in the street."

At one point during the storm, she tried to check on her home, but "I took a few steps and couldn't move forward. The wind said 'no."'

The remains of Felix were still dumping rain Wednesday on Honduras, El Salvador, Nicaragua and Guatemala, and thousands of evacuees anxiously stayed away from shaky hillside slums and swollen rivers.

In San Pedro Sula, in northern Honduras, one shantytown filled with water after a river burst its bank. Police rode bulldozers to evacuate slum dwellers from water that was waist-deep and rising, but many refused to leave, fearing their remaining possessions would be stolen.

David Serato, 42, left. "Life is more important than personal belongings," he said. "If I stayed, I would die."

Many had feared a repeat of the 1998 nightmare of Hurricane Mitch, which stalled over Central America for days, causing floods and mudslides that killed nearly 11,000 people and left more than 8,000 missing.

On Mexico's western coast, Henriette moved across the Gulf of California. Its center later made its second landfall near the Mexican city of Guaymas in Sonora state, said Jack Beven, a specialist with the Miami-based center. The storm was moving northward at 13 mph.

Schools and ports were closed and people evacuated from low-lying areas, but the storm was expected to weaken quickly over the desert before dumping a few inches of rain Thursday on New Mexico.

Among the coastal communities sure to get drenched was San Carlos, a beach town packed with American retirees that neighbors Guaymas.

Henriette set off mudslides earlier that killed six people in Acapulco as it moved northward up Mexico's Pacific coast, and a woman drowned in high surf as the storm approached the Baja California peninsula.

The storm became a hurricane just before its direct hit on the upscale desert resorts of Los Cabos on Baja's southern tip Tuesday. The luxury hotels suffered little damage, but plywood shacks in the surrounding slums were destroyed.

"Everything is soaked," said Homero Cruz Marcelino, a 28-year-old gardener who rode out the storm with his pregnant wife and son in a shack that was reduced to little more than a wooden frame. He estimated the damage at $500, a small fortune given his income.