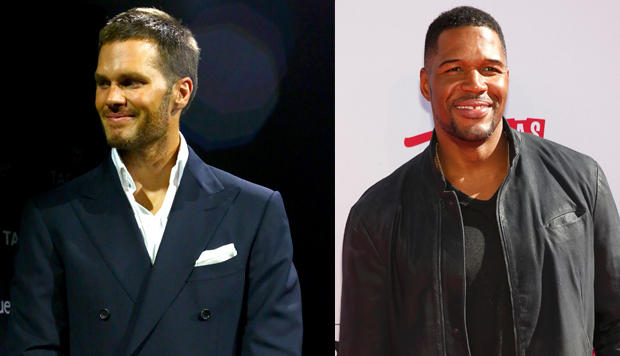 BOSTON -- Call it the unholy alliance: one-time Super Bowl rivals Tom Brady and Michael Strahan are teaming up to produce a six-part documentary TV series called the “Religion of Sports.”

Each hour-long episode looks at different examples of the cultural and spiritual impact of sports in religions around the world.

The show explores the rivalry between soccer clubs in Glasgow, Scotland; the Calgary Stampede rodeo in Alberta, Canada; and the rise of “e-sports.” It also delves into NASCAR, mixed martial arts and minor league baseball.

The Associated Press caught up with Brady, Strahan and Gotham Chopra - the creator, director and voice - of the series that airs beginning Nov. 15 on the Audience Network on DirecTV and AT&T U-verse.

Brady is a quarterback for the New England Patriots. Strahan is a retired New York Giants defensive end, who is joining ABC’s “Good Morning America” this fall. Chopra is the son of spiritual guru Deepak Chopra.

Their comments have been edited for clarity and length:

Where did the idea of this show come from?

Chopra: Figuratively I feel like I’ve been working on this my whole life. Obviously growing up with my father, I was around that world of spirituality and religion. But I also grew up in Boston. I bled green as a Celtics fan in the ‘80s. I loved sports. About five years ago, I had a conversation with my father, who never really understood that devotion to sports. And I remember saying to him that all of those things you speak in the spiritual tradition also exist in sports.

What drew you to this project?

Strahan: I love the emotional aspect of it. You hear “Religion of Sports,” and you say, “OK, so sport is a religion?” Well, yeah, it really is. The temple is this arena or stadium. These athletes can be considered the gods in certain ways and the fans can be considered parishioners. So to be able to explore that and this spiritual connection between sports and life, that’s what really piqued my interest.

You say sport creates a “spiritual experience” for both fans and players. How would you describe that to non-sports fans?

Brady: It’s pretty simple: In sports you often become part of something greater than yourself. On the field, you come into sync with your teammates and coaches and together you achieve something that you could never do on your own. And as an athlete, when you are on that field and the fans get really engaged and you can feel their energy and passion and true love of the game, it is absolutely a spiritual experience.

How is this series going to be different from other sports documentary shows out there?

Chopra: I compare it a lot to “This American Life.” It’s stories about why sports gives people purpose, meaning and significance - whether you’re an athlete, fan or person that works within sports. It’s very much character-driven. The backdrop happens to be sports.

What was the most interesting thing for you about this project?

Strahan: It’s finding out those backstories and motivations. It’s the real heart-to heart-feel of everybody’s story. Cat Zingano (a mixed martial arts fighter the series followed as she prepared for a comeback fight earlier this year) and her reason for doing what she’s doing. Once you see that episode, you’ll have a much deeper appreciation for who she is and what she’s come from.

Did you learn anything new about sports culture in the making of this?

Brady: As far as the series goes, it’s great to learn more about sports I’m probably less familiar with - stock car racing, rodeo, e-sports - and realize that a lot of the people at the center of those sports bring the same level of passion, commitment and disciple that I try to with football. Sports is a way of life for billions of people around the planet. “Religion of Sports” takes you beyond sports as we know it.