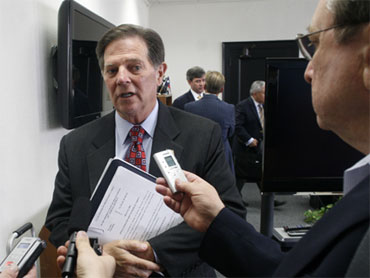 Prosecutors alleged that DeLay took part in a scheme to illegally channel corporate money into Texas legislative races in order to strengthen his power and influence.

DeLay's attorneys countered that no corporate money was given to Texas candidates and that the only thing the once-powerful but polarizing ex-lawmaker is guilty of is being a good politician.

"The evidence will show you they took the corporate money they knew could not be given and came up with a scheme where that dirty money could be turned clean and given to candidates," Mathews said.

Mathews told jurors the $190,000 that was collected by DeLay's Texas political action committee was exchanged for the same amount through the Republican National Committee and ultimately given to seven Texas candidates. She said the money swap was supervised and facilitated by DeLay.

Mathews said the Republicans won a majority in the Texas House as a result of DeLay's scheme, meaning they could then push through a congressional redistricting plan engineered by DeLay that would send more Texas Republicans to Congress.

Republicans won a majority in the Texas House in 2002 and congressional redistricting sent more Texas Republican to Congress in 2004.

The criminal charges in Texas, as well as a separate federal investigation of his ties to disgraced former lobbyist Jack Abramoff, forced DeLay to step down as majority leader and eventually to resign after representing suburban Houston for 22 years. The Justice Department has since ended its federal investigation into DeLay's ties to Abramoff without filing any charges against DeLay.

DeLay has been mostly out of public view since resigning from Congress, except for an appearance on ABC's hit television show "Dancing With the Stars." He now runs a consulting firm based in the Houston suburb of Sugar Land.