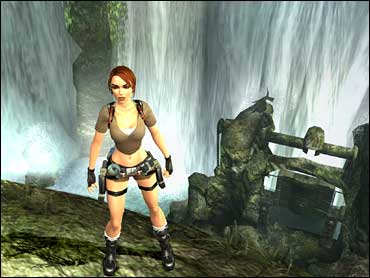 In 1996 a pixilated, blocky female version of Indiana Jones named Lara Croft was introduced to gamers.

She made her debut appearance in Eidos' Tomb Raider: The Scion of Atlantis, developed by Toby Gard of Core Design. At the time, Tomb Raider represented the pinnacle of design for action-adventure type games. What it introduced to all those who played was a game that was built on puzzle solving, exploration, suspense and discovery in a way no other game — at the time — had provided. But as this newly created franchise flourished in successful sequels, it also set off another trend, one that is still developing as more and more games get developed for the big screen. Lara was becoming more "Hollywood."

2
In 2001 Lara Croft: Tomb Raider, starring the sultry Angelina Jolie, blazed across thousands of movie screens, leaving loyal Tomb Raider fans with mixed emotions. The movie clearly illustrated the direction that the games were going in, slowly moving away from the core concepts that made the franchise so successful, such as tomb exploration and lost civilizations.

Soon after the fourth installment of the game, two more Core Design-developed sequels followed. They were Tomb Raider Chronicles and Angel of Darkness, and while the latter set out to be an ambitious project, the delayed release dates and various bugs just added fuel to the fire for already-annoyed Tomb Raider fans.

Now — two movies and six titles later — Eidos is back at it again, this time harnessing the talent of Crystal Dynamics (the developers behind the acclaimed Legacy of Kain). Eidos has these folks hard at work trying to revamp the franchise and return it to its former glory, and they will do so by bringing Tomb Raider back to its origins. They are removing Lara Croft from her current settings (sky scrapers and high tech environments) and putting her back into exotic locales (it's called Tomb Raider for a reason, people).

Returning the Tomb Raider to actual tomb raiding is a concept that will lead to huge sighs of relief from gamers worldwide. That is, if they're still paying attention to the series.

For those that are, some good stuff awaits them in Tomb Raider: Legend. How do we know? Well, some members of the Eidos team stopped by the GameCore offices to give us a sneak peek at a demo. Here's what you can expect.

In Legend, Lara Croft has an electronic life of her own. She stretches when waiting for user interaction, and the animation rocks. They've managed to significantly bump up the titular character's pixel count to a ridiculously large number (upwards of 10,000 polygon count) making her edgeless and smooth even while she's moving.

The jumps, cliffhangers and all other moments where Lara narrowly escapes death are also pretty sweet. If Lara attempts a jump and the system in place detects that it's going to be too shallow, she will either simply hang on to the ledge she's jumping from or stretch to grab unto the ledge she's aiming for with one hand. As per Eidos, you'd really have to want to kill her in order for her to die in those circumstances.

Seeing Lara do flips, cartwheels, long jumps, pull-ups and splits, is like seeing a gymnast in action. That's because the fluidity of her movements was a huge emphasis for the Crystal Dynamics design and development team. We can't talk about movement without going into the "dynamic body physics" (coined by Eidos) that they have been working on. Let's just say that watching Lara breath will definitely be some kind of wonderful.

Dressed in her traditional green shorts, midriff-baring T-shirt, black boots and black fingerless gloves, Lara — in a change from previous versions — comes armed with little else. In an effort to add a touch of realism to Legend, Crystal Dynamics decided to only allow a minimal amount of accessible items that can be carried. Lara can carry an extra weapon aside from her trusty pistols, as well as limited items in her "utility belt" and her new grappling hook. The grappling hook gives Lara extra mobility when attempting to traverse chasms, avoid death traps and pull items. We'd love to see her use it to toss an enemy around, but that probably won't make the final cut. Keep your fingers crossed though.

One of the coolest new features appears to have been influenced somewhat by the Tomb Raider movies. It's a "com link" that looks like a Bluetooth-enabled headset, which Lara uses to communicate with her tech team back home. Eidos explained that this is a player help feature meant to provide the user with clues and direction as to where the next progression point is. I could've used that in the Palace of Midas in the original Tomb Raider — figuring out the trick behind those doors was a massive headache.

Eidos also made mention that there will be some sort of targeting system for dealing with those nasty enemies. Hopefully they get this right in the final version. One feature that seems promising is the user-controlled camera angles. Unlike the horrible camera placements and limited free movement of the camera in the first few titles, Crystal Dynamics managed to give the user full 360-degree control of camera placements. Again, we'll have to wait for the final version to see if this breakthrough holds true.

Remember the loading time problems in previous games, especially the second title? No longer an issue. The gamer's frustration level has been brought down by single level loads. Only at the beginning of each level will you experience a load time, but a nice touch would be some sort of full-motion video so you're not stuck watching a progress bar fill up.

Perhaps it's still too soon to call this a comeback, but Eidos and Crystal Dynamics have thus far showed us that the game might just be the comeback kid. With 15 to 20 hours of expected game play, Eidos might be onto something with this last-ditch effort to bring back a dying franchise. Lara's got a new lease on life and the ability to seamlessly handle any obstacle and interact dynamically with any surface. She's been returned to the tombs and ancient realms that made us love the game in the first place.

The expected release date is April 11, 2006. Check your neighborhood retailer for copies of Legend. It will be available for PC, XBOX 360, XBOX, PS2, and PSP. If everything pans out, this has the potential to be a must-have title for '06, great news for Tomb Raider fans past and present.
By Chad Chamberlain