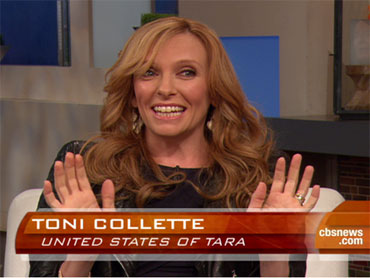 Toni Collette has won both an Emmy and Golden Globe award for her work in the Showtime series "United States of Tara."

The show returns for its second season next week, and you can expect more confrontations among Tara's multiple personalities.

The Australian native sat down with Early Show co-anchor Harry Smith to discuss her multi-dimensional character.

Collette is having a ball in the role of Tara, telling Smith, "I love it. The role of a lifetime. It's challenging and satisfying, and I'm working with a great bunch of people, great material. Couldn't ask for more," she said. "I think actors want variation in their career. And to have it in the one show..." this left the actress speechless.

Showtime's "United States of Tara," created by Diablo Cody, follows the life of a suburban housewife with Dissociative Identity Disorder (DID) who lives in Overland Park, Kan. The series' first season aired in 2009 and the second season will premiere March 22, 2010.

Collette's character, Tara Gregson, is a wife and mother of two children. Whenever she is stressed, she transforms into one of her alternate personalities: wild and flirty teenager T; old-fashioned housewife Alice; and male, loud, beer-drinking Vietnam vet Buck. A fifth personality, Infantile Gimme, wasintroduced later in the first season.

Going into this, Collette had no idea that her role on "United States of Tara" would end up being so richly rewarding.

She won the 2009 Primetime Emmy Award and 2010 Golden Globe Award for Best Lead Actress in a Comedy Series for her role, while the opening title sequence also won an Emmy.

"It is rewarding, just working on the show. So, all of that other stuff is, you know, it's big fat cherries on top," she gushed. "It's great for the show and hopefully will elongate the life of the show and broaden the audience."

Although the "United States of Tara" is "a pretty collaborative journey," Collette leaves it up to the writers to come up with her character's new endeavors.

But when she gets the green light, she delves into her own bag of tricks. "I figure out, I put it together," she said.

Tara has been a little quiet lately; she's been sort of at home with herself, so to speak.

But the serenity can't go on for long.

"No. Well there would be no show. So eventually it dawns on her that the alters (alter-egos) aren't gone, and one of them has been coming out," she said. "It's slightly devastating and she tries to handle it alone."

As if the awards weren't enough, Collette feels gratified knowing the show reaches out to its viewers.

During a DVD signing for the first season of the show, Collette met a woman who said, "'I have DID (Dissociative Identity Disorder) and I love the show.' That is the biggest compliment we could have," she said.

Actor John Corbett, who also starred in "Sex and the City" (he played Carrie's boyfriend, Aidan) as well as on Broadway, now plays Collette's husband, Max, in "United States of Tara."

The two even sing together in the show.

"He's fantastic. He's a joy to work with. Probably the best on-screen husband you could have. Very funny person. Very talented," Collette said.

Tara and Max have a somewhat troubled teenage daughter Kate and quirky, good-hearted gay son Marshall. Her sister, Charmaine, is not so supportive, often expressing her doubt about the validity of Tara's disorder.

Collette's acting abilities are limitless -- so convincing that oftentimes her audiences don't realize they are watching the same actress. Like a chameleon, the multi-faceted actress can physically transform to any character with any type of accent.