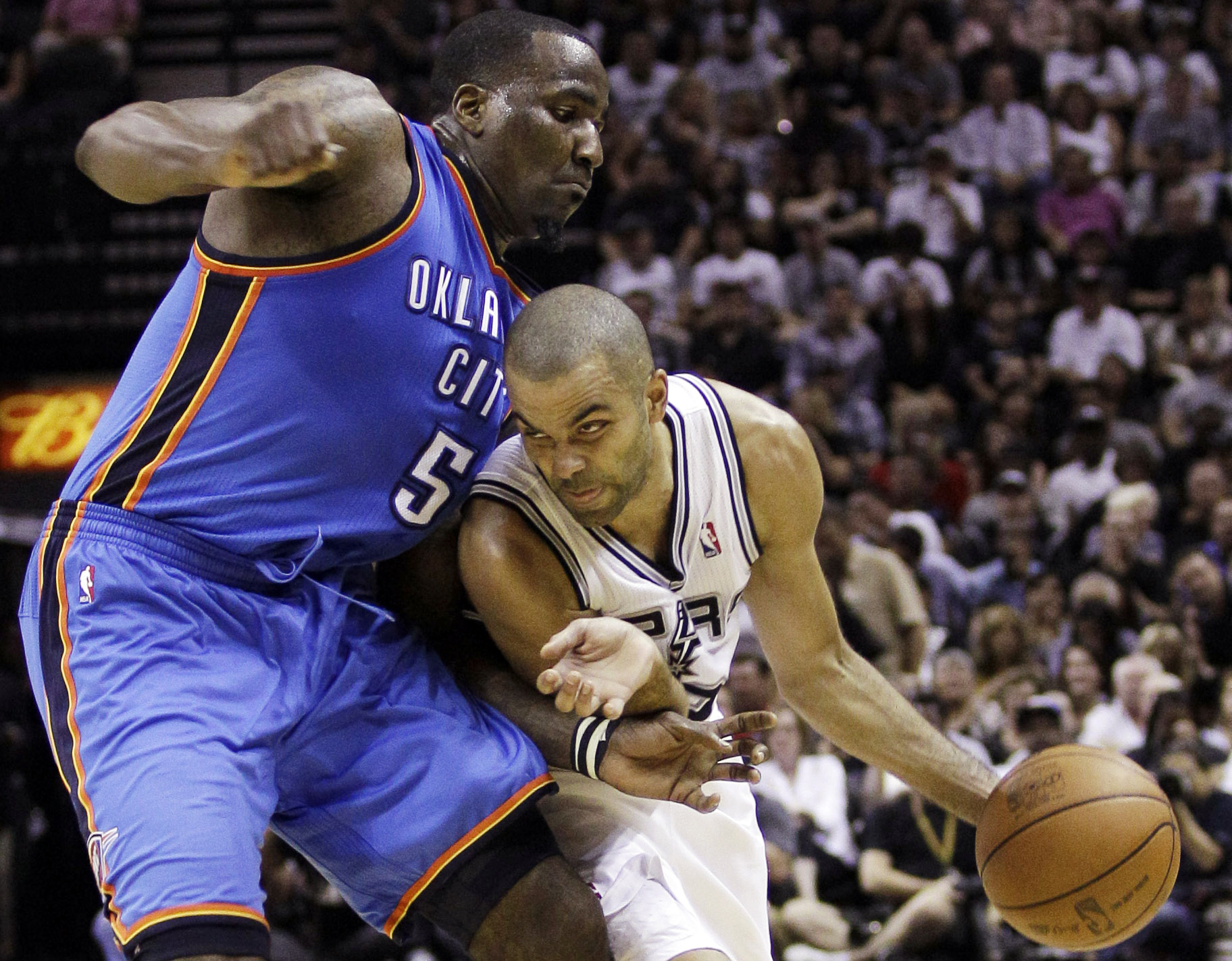 Parker had 34 points and eight assists, Manu Ginobili added 20 points and the Spurs stayed perfect in the playoffs with a 120-111 victory over the Oklahoma City Thunder in Game 2 of the Western Conference finals Tuesday night.

So far, the Spurs have turned a hotly anticipated matchup between the league's top two scoring teams into a lopsided mismatch more befitting of an early round.

Game 3 is Thursday night in Oklahoma City, and the Thunder can only hope that a change of venue throws San Antonio out of its groove. The Spurs put on an offensive clinic for three quarters on Tuesday night, shooting 60 percent and building a 22-point lead.

"They don't describe the way he sliced in and out of the lane, carving up the Thunder defense, tearing it down, collapsing it," Doyel writes. "If this were a hockey game, Parker would have had another 10 or so assists, the kind the NHL gives to the player who made the pass that created the actual assist. That's what Parker did over and over, getting into the lane, kicking it to a teammate who would swing it another teammate, wide open, for the easy jumper."

The Spurs set an NBA record with their 20th consecutive victory bridging the regular season and the playoffs. They came in sharing the longest such streak with the 2000-01 Lakers, who won 19 straight before losing to Philadelphia in the first game of the finals.

Those Lakers went on to win the championship and Parker's performance is yet another reason to think the Spurs will do the same.

"It's great and it is a great run," said Tim Duncan, who had 11 points and 12 rebounds. "But we are only worried about the next two wins in this series. That is all that matters, at this point."

The Thunder made a late surge to get within six points, but Parker, Ginobili and Duncan helped San Antonio finish them off. Oklahoma City is 5-0 at home in the playoffs, but only 14 teams have come back from 2-0 deficits to win a series in NBA playoff history.

Kevin Durant had 31 points, Westbrook had 27 points and eight assists and James Harden rebounded from a rough Game 1 to score 30 for the Thunder, who have lost two straight for the first time since early April. Oklahoma City dropped to 15-4 in games after losses this season.

"There are no moral victories for us," Durant said. "We were down. We dug ourselves a hole. We did what we normally do, which is fight all game, and we lost."

San Antonio picked up where it left off from the 39-point fourth quarter that turned Game 1 on Sunday. With sharp passes and hot shooting, the Spurs jumped to a 19-9 lead after the Thunder missed six of their first seven shots and had three turnovers in the first 4 minutes.

Durant was on the bench at the start of the second quarter, and Parker and the Spurs put together a 14-4 spurt to stretch the gap to 13 points. Westbrook hammered Parker's arm on a drive and he crumpled to the court. That didn't faze Parker, who scored the Spurs' next seven points to keep San Antonio rolling.

"You never go out and say, `We're going to start out fast,"' San Antonio coach Gregg Popovich said. "You don't know what is going to happen. You just want your team to be aggressive."

After the break, the Spurs resumed picking apart Oklahoma City's defense with precision passes, scoring on five straight possessions. The biggest cheer from the crowd came after Ginobili flipped a behind-the-back pass to Parker in the corner for another 3 and the lead ballooned to 78-58.

Late in the third quarter, the Thunder began intentionally fouling Tiago Splitter, a 32 percent free-throw shooter during the playoffs.

That backfired, too. Splitter went 5 for 10 over a 54-second span before Popovich replaced him with Duncan, and Oklahoma City trailed by the same margin — 16 — that it did when Brooks called for the "Hack-a-Splitter" strategy.

It may not have showed on the scoreboard, but the Spurs seemed to lose their edge after that.

"There's a reason why you do it, to kill the rhythm," Parker said. "I think it got us out of our rhythm."

Parker, Ginobili and Duncan were on the court together at the 8-minute mark, after the Thunder cut the deficit to eight. Ginobili's floater in the lane was only the Spurs' third field goal of the fourth quarter and put San Antonio up 99-89.

The Thunder had the deficit down to six with just over 5 minutes remaining. The Spurs missed 12 of 15 shots during one stretch, but Parker hit an off-balance, high-arcing jumper with 3:39 left for a 107-96 lead and San Antonio controlled the game from there.

Notes: The Spurs' winning streak is the longest in the NBA overall since the Houston Rockets won 22 straight between Jan. 29-March 18, 2008, all in the regular season. ... The Thunder are the first team to reach 100 points against San Antonio in the postseason. ... Kawhi Leonard scored 18 points, including three 3-pointers for the Spurs. ... Duncan blocked four shots to tie Hakeem Olajuwon for second in career blocks in the postseason (472). Kareem Abdul-Jabbar is the leader (476). ... Oklahoma City's Derek Fisher went 2 for 11 from the field after scoring 13 points in Game 1.