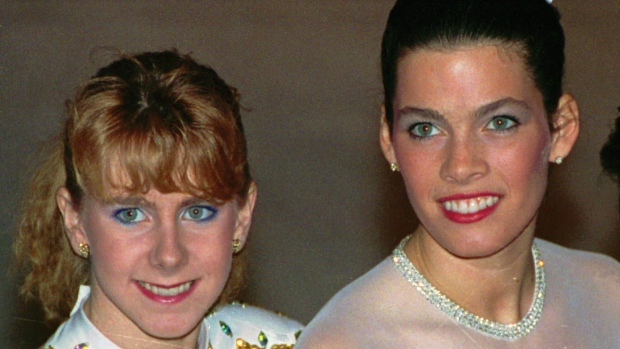 Mention those names to figure skating fans, or even to those with little interest in the sport, and there's an immediate response of recognition.

Well, it's been nearly 20 years since Nancy Kerrigan was clubbed after practice in Detroit by a member of a bumbling goon squad hired by Tonya Harding's ex-husband with the hope of eliminating his former wife's top competition for the U.S. Olympic team. The assault led to a soap opera that practically created tabloid television journalism, taking what had for decades been a niche sport and putting it squarely into the media mainstream.

By the time a recovered Kerrigan and a besieged Harding reached Lillehammer, their saga was front-page news and can't-miss TV.

"Mainstream media was constantly looking for the next juicy story, and they were insatiable and they were intrusive,'' said Scott Hamilton, the 1984 Olympic champion who pretty much has been the voice of the sport since then."What I saw and read was alarming. From the New York Times and Washington Post to the National Enquirer, World News and the other tabloids -- every member of the media on all levels, no matter their affiliation -- they were kind of equal for that moment in pursuing this story.”

"It kind of shook me. This was a desperate appetite, a desperate nature. And it kind of dovetailed into the O.J. Simpson stuff later.''

Yet the attention figure skating would get from the scandal was a boon for the sport.

Often considered elitist because of its expense, and only something to watch whenever the Winter Olympics rolled around, skating entered an entirely different realm because of Tonya and Nancy.

That surge in popularity lasted for the rest of the 1990s.

"It really expanded skating so much to the point that it was unsustainable,'' says Byron Allen, who produces the Stars On Ice tour as IMG Worldwide's senior vice-president. "What was there for the time was fabulous, and there was so much interest from all angles. Not only for the sport -- it did expand the sport -- but from the entertainment side, and the scandal side.

"People became household names rapidly with so much exposure ... it developed the industry so quickly and so large. But it created unrealistic expectations.''

Suddenly, with the exception of Harding, who would be banned from the sport for life for her role in the attack, skaters were in demand. From the Olympic winners at Lillehammer such as Oksana Baiul, who edged Kerrigan for the gold, to past champions and legends, TV networks couldn't get enough of skating.

Even in non-Olympic years, arenas wanted the two major tours -- Stars On Ice and Champions On Ice -- along with any other shows featuring folks who could jump, spin and twirl. Both tours were visiting cities across the United States and Canada, and heading off to Europe, Asia, and even to the non-skating continents.

Tom Collins, who owned Champions On Ice for three decades, said business "quadrupled when that incident happened. It put skating in the stratosphere; you couldn't sell enough tickets.''

It was, by far, the most lucrative period for skaters in the sport's history. Some of the biggest names were regularly pulling in seven figures.

"Clearly there was an explosion in the sport's popularity and exposure, which was fun to be part of,'' Kerrigan said.

Taking note of the incredible ratings, the networks clamored for more. Made-for-television shows, like "Skating with the Stars,” "Battle of the Sexes on Ice and “Ice Wars” filled air time as figure skating became must-see-TV.

With so few true competitions on the schedule, TV folks started creating their own. Along with themed shows, there were mixtures of skating and live music, or skating and other sports (gymnastics, most notably).

It was a free-for-all, and some sort of figure skating could be found nearly every night.

"I was producing some of those shows," 1988 Olympic gold medalist Brian Boitano aid, "but I was also hired as one of the headliners for those. I believe in 1995, we had 13 prime-time network pro competitions. Paul Wylie did all of them. I only did five of them; didn't have the energy to do more"

"It was full time, nonstop. Networks were buying anything. I remember a rock 'n roll competition judged by Playboy bunnies."

Along with so many programs came so much money. Skaters who had to scrounge to make ends meet in their developmental years became millionaires.

"There was no sense during that point of going overboard," Dustin says. "All these skaters felt all of a sudden that their talent was being appreciated, and on a larger scale than they reached before, except in the Olympics. I wouldn't call these silly shows, either. You wanted to look at them as legitimate and we tried to do so, getting real skating aficionados as judges. We were all the same guys who covered the Olympics and were a part of figure skating."

But the TV bonanza had become too much a part of figure skating. It led to overkill, and by the end of the 1990s, with the exception of Olympic-related events, the spotlight was dimming.

Now it's a big deal if NBC airs a highlight package of a Grand Prix event.

"I think it comes down to story lines," Dustin says. "Think about Nancy and Tonya and what unbelievable drama it was. Those story lines got old or went away."