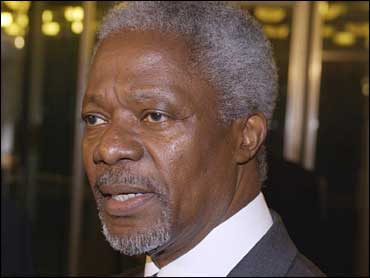 U.N. Secretary-General Kofi Annan made his strongest pitch yet to President Bush for American peacekeeping troops in Liberia, but President Bush is deferring his decision until he gathers more information.

President Bush said Monday that any deployment of American troops to Liberia would be limited in size and duration and would depend on Liberian President Charles Taylor stepping down and leaving the country.

President Bush gave no indication he was close to a decision, and aides said they didn't expect one this week. He offered no hint of whether any U.S. contingent would comprise military advisers, humanitarian experts or soldiers.

The president commented after meeting at the White House with Annan, who appealed for help in bringing peace to Liberia.

Asked whether United Nations or U.S. involvement is necessary, Annan said, "I think for us to pacify Liberia, both will be necessary."

The president said he was awaiting reports from two teams he sent to assess the situation in Liberia, one reviewing the humanitarian needs there, the other the military situation.

"I think everybody understands, any commitment we have would be limited in size and limited in tenure," President Bush said.

"It may require troops. We don't know how many yet," President Bush said after meeting with Annan. "Therefore, it's hard for me to make a determination until I see all the facts."

President Bush said he had pressed advisers in a meeting of the National Security Council on when the assessment teams would report back.

The Pentagon, meanwhile, said it had sent aircraft to neighboring countries in case members of the Liberia assessment team need to be evacuated. Three helicopters were sent to Sierra Leone and one MC-130 special operations transport plane was sent to Senegal, according to Navy Lt. Dan Hetlage, a Pentagon spokesman. There are about 100 U.S. troops with the four aircraft, he said.

The Pentagon had previously arranged for commercial aircraft to stand by in case an evacuation was required but they became unavailable this week, so the military planes were sent, Hetlage said.

President Bush said he wanted to help enforce a cease-fire, but he added: "This is conditional on President Taylor leaving. He's got to leave."

Annan said he expected the Economic Community of West African States to send up to 2,500 troops.

"After that, from what I gather, President Taylor will leave Liberia, then the force will be strengthened, hopefully with U.S. participation and additional troops from the West African region," Annan said.

Eventually, U.N. forces would supplant the initial forces, he said.

President Bush and Annan also discussed postwar Iraq and the search for peace in the Mideast, and efforts to battle poverty and AIDS around the world.

It was the first meeting between the U.S. president and the U.N. leader since Dec. 20, and since a divisive U.N. debate over a resolution - ultimately withdrawn when faced with certain defeat - backing a U.S.-led invasion to oust Saddam Hussein's Iraqi government.

Annan, who is from Ghana, near Liberia, has joined with European leaders and many Liberians to plead with the United States to lead a team of international peacekeepers into the country to enforce a rebel-government cease-fire.

After meeting with Secretary of State Colin Powell, Annan said he hoped "the decision will be coming shortly and I hope it will be positive."

He said the administration had a preliminary report from the assessment team "but they want to see the full report before a final judgment will be made."