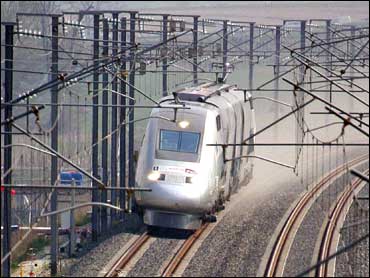 A French train with a 25,000-horsepower engine and special wheels broke the world speed record Tuesday for conventional rail trains, reaching 357.2 mph as it zipped through the countryside to the applause of spectators.

Roaring like a jet plane, with sparks flying overhead and kicking up a long trail of dust, the black and chrome V150 with three double-decker cars surpassed the record of 320.2 mph set in 1990 by another French train.

At that speed, it could get from Washington to New York City in 40 minutes instead of the three hours it takes now, CBS News correspondent Mark Phillips reports.

However, the French train fell short of beating the ultimate record set by Japan's magnetically levitated train, which hit 361 mph in 2003.

The French TGV, or "train a grande vitesse," as the country's bullet train is called, had two engines on either side of the three double-decker cars for the record run, some 125 miles east of the capital on a new track linking Paris with Strasbourg.

The demonstration was meant to showcase technology that France is trying to sell to overseas markets such as China. Hours before the run, Transport Minister Dominique Perben received a delegation from California, which is studying prospects for a high-speed line from Sacramento to San Diego, via San Francisco and Los Angeles.

As the V150 sped through the countryside, people lined bridges and clapped and cheered when it roared beneath them.

"We saw the countryside go by a little faster than we did during the tests," said Eric Pieczac, who operated the train. "I'm proud to have fulfilled the mission."

"Everything went very well," he added.

Technicians on the train had "French excellence" emblazoned on the backs of their T-shirts.

Philippe Mellier, president of Alstom Transports, the builder, had said before the test that the train would try to break the record held by the Japanese mag-lev train. The company bid $40 million for the train, Phillips reports.

The V150 was equipped with larger wheels than the usual TGV to cover more ground with each rotation and a stronger, 25,000-horsepower engine, said Alain Cuccaroni, in charge of the technical aspects of testing.

Adjustments also were made to the new track, which opens June 10, notably the banking on turns. Rails were also treated to the wheels could would perfect contact, Cuccaroni said. The electrical tension in the overhead cable was increased from 25,000 volts to 31,000.

It was the first time that double-decker cars were used at such a high speed, according to officials of Alstom, which makes TGVs and crawled back a year ago from the edge of bankruptcy.

The double-decker cars were transformed into a laboratory for the event so that technicians from the state-run rail company SNCF and Alstom could gather data during the run.

The goal was more than "simply breaking a record," Cuccaroni said, adding that data from the test should help improve the security and comfort of passengers.

The record gilds France's image in the expanding market for high-speed technology as countries turn to bullet trains. France competes with neighboring Germany and with Japan for contracts.

China, the biggest potential market, plans to start building a high-speed line this year between Beijing and Shanghai to cut travel time from nine hours to five.