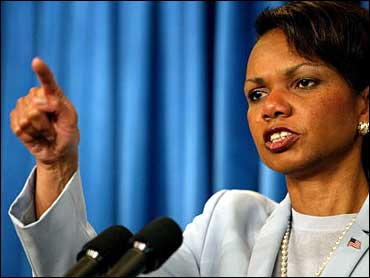 Iraqi President Saddam Hussein is an evil man who will wreak havoc on the world if the West does nothing to stop him, National Security Adviser Condoleezza Rice said in an interview broadcast Thursday.

Rice said the U.S. belief in the "moral case" for removing Saddam from power was undiminished.

"This is an evil man who, left to his own devices, will wreak havoc again on his own population, his neighbors and, if he gets weapons of mass destruction and the means to deliver them, all of us. (It) is a very powerful moral case for regime change," she told British Broadcasting Corp. radio. "We certainly do not have the luxury of doing nothing."

Echoing President Bush, Rice said that Saddam's pursuit of chemical, biological and nuclear weapons in defiance of its disarmament pledge after the 1991 Gulf War was a powerful case for a regime change.

"He shoots at our planes, our airplanes, in the no-fly zones where we are trying to enforce U.N. security resolutions."

Rice said breaking down the al Qaeda network was the priority after the Sept. 11 attacks "because we did not know how many more World Trade Centers were already planned and ready to go" but Saddam was now a focus.

"Clearly if Saddam Hussein is left in power doing the things that he is doing now this is a threat that will emerge, and emerge in a very big way," she said.

"History is littered with cases of inaction that led to have grave consequences for the world. We just have to look back and ask how many dictators who ended up being a tremendous global threat and killing thousands and, indeed, millions of people, should we have stopped in their tracks," she added.

Since the Sept. 11 strikes on America, the U.S. government has intensified a debate over a possible attack on Iraq.

The Financial Times reported on Thursday that the United States had launched a public bidding process for humanitarian relief organizations to work in Iraq and neighboring areas as it prepares for a possible military strike.

The newspaper said it had obtained a document from the State Department inviting proposals for humanitarian aid projects in Iraq and for Iraqi refugees in surrounding countries.

A State Department spokesman in Washington said he had no information on the report.

Government officials, including President Bush, have sought to play down expectations of an imminent attack on Iraq. Yet official U.S. policy has been to seek a regime change.

British Prime Minister Tony Blair has backed Bush staunchly since the Sept. 11 attacks but while polls show Americans support an attack on Iraq, most Britons do not.

Ranks of clergy and even Blair's own supporters are lined up against him but few analysts expect the prime minister to stand on the sidelines if the United States attacks.

Meanwhile, Israel's air force chief said Wednesday that if Iraq attacks Israel in response to an American invasion, as it did during the Persian Gulf War, this time Israel will react.

Maj. Gen. Dan Halutz, speaking in comments televised on Wednesday, did not say how Israel would respond, but Israeli officials have hinted that the response to a conventional attack would consist of airstrikes and ground attacks by airborne forces.

In 1991, Iraq fired 39 Scud missiles with conventional warheads into Israeli cities, causing extensive damage but few casualties. The United States asked Israel not to respond, as this would have led Arab countries to quit the broad alliance Washington had formed. Israel complied, reluctantly.

Transport Minister Ephraim Sneh, who is also a retired general, said Thursday that Israel is in a much better position to fight back than during the Persian Gulf War.

"Our ability to react is incomparably better than it was then," he told army radio.

In 1991 the United States supplied Israel with some batteries of Patriot surface-to-air missiles, but the Patriot, designed as an anti-aircraft missile, proved ineffectual against the Scuds.

Since then Israel, with partial American finance, has developed the Arrow, the only anti-missile missile in the world. The U.S. has also sent Israel an improved version of the Patriot.