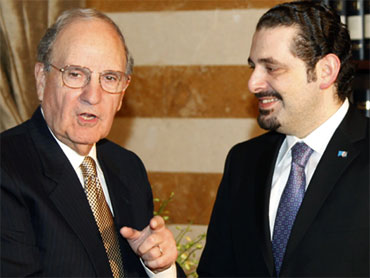 (AP Photo/Bilal Hussein)
This story was filed by CBS News' George Baghdadi in Damascus.U.S. Mideast envoy George Mitchell arrived Wednesday in Damascus to hold talks with Syrian President Bashar Al-Assad, the latest concrete signpost on the Obama administration's path to try and re-launch negotiations between Israel and its Muslim neighbor — but expectations were low.

Mitchell flew in from Lebanon for a one-day visit — a trip that was previously scheduled for December but postponed — to discuss how to push forward the peace process in the Middle East and review bilateral U.S.-Syrian relations. This is Mitchell's third visit to Damascus since he was named President Obama's chief envoy to the region.

"Syria certainly has an important role to play in all of these efforts," he said.

Assad was quoted as telling Mitchell: "Establishing peace requires ending occupation and giving rights back to their owners." He added that the government which "openly declares its lack of desire for peace can not be a real partner."

In Beirut, where he started a regional tour that will also take him to Israel and the Palestinian territories, the U.S. envoy held talks with Lebanese Prime Minister Saad Hariri and President Michael Suleiman.

Frederic C. Hof, a conflict resolution expert and top aid to Mitchell, held closed-door discussions last month in Damascus with Syrian Foreign Minister Walid Mouallem. There was no word from Syrian government sources on what that visit accomplished, but it was seen by many diplomats as part of the U.S. strategy to get more involved in the Middle East process.

Hof, who advises Mitchell on Syria and Lebanon, authored an academic proposal earlier this year to solve the dispute over the Golan Heights — territory claimed by both Syria and Israel. His proposal would see much of the strategic plateau converted into a nature reserve that would be accessible to both Israelis and Syrians.

Officials in Syria have played down the significance of Mitchell's new drive, predicting it will yield no surprises as Washington is thought to be putting enough pressure on the Israeli government.

"Real peace in the Middle East requires an Israeli commitment to the relevant international resolutions and an American push in this direction, which is convincing Israel of the necessity to abide by these resolutions as the only basis for peace," a political commentary in a Syrian state-run newspaper noted on Tuesday.

Mitchell's latest tour of the region comes less than a week after President Obama's national security adviser, James Jones, held talks with Palestinian and Israeli leaders. There were reports then that Washington was pushing a plan to restart peace talks between Israel and the Palestinians — an ambitious plan which foresaw a final deal within two years and agreement on permanent borders in just nine months.

Under the U.S. plan, the Israelis and Palestinians would immediately resume final status talks that were suspended during the Gaza war a year ago.

Mr. Obama has been struggling to get the two sides back to the negotiating table since he assumed office, but one year into his leadership has thus far failed to get Israel to completely halt settlement construction or to secure Arab concessions to Israel.

Mitchell's visit to the Syrian capital comes after Israeli officials said Turkey was no longer wanted as mediator between the two countries.

Turkey brokered four rounds of indirect talks between the two foes in 2008 — the first such contacts since previous peace negotiations were broken off in 2000 over the fate of the Israeli-occupied land in the Golan Heights, along Syria's border.

Ties between Washington and Damascus became strained after the U.S.-led invasion of Iraq in 2003 and the assassination of Lebanese leader Rafiq Hariri in 2005, which was widely blamed on Syria. Damascus denies any involvement.

Since being sworn, Mr. Obama has cautiously sought to improve ties with Syria. Congressional visitors have made a flurry of trips to the country and the U.S. decided to return an ambassador to Damascus after nearly five years absent as a reward for Syria's help in the region and perceived attitude change, including the exchange of diplomatic representation with neighboring Lebanon and a move to boost security along its border with Iraq.

Arab diplomats suggest Syria might represent a slightly more attainable goal of the Obama White House's Mideast agenda - certainly when compared to the prospects of a breakthrough in Palestinian-Israeli peace negotiations.

Syria has appeared increasingly confident on the world stage, breaking out of its previous international isolation. Barely a day goes by without a Western politician or envoy knocking on Assad's palace door.

U.S. under Secretary of State for political affairs William J. Burns is also expected to turn up in Damascus next month for a new round of talks with the Syrians.