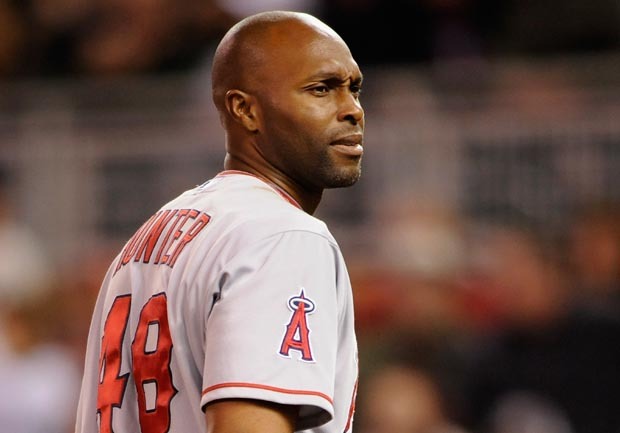 (CBS/AP) ANAHEIM, Calif. - Torii Hunter was placed on the Los Angeles Angels' restricted list Monday after his teenage son was arrested in Texas.

The town of Prosper, Texas, issued a news release announcing 17-year-old Darius McClinton-Hunter of neighboring McKinney, Texas, was arrested Monday in a sexual assault case. The release said Prosper police made five arrests after a monthlong investigation of sexual assault of a child, a second-degree felony.

Angels manager Mike Scioscia said Hunter has left the team, but refused to say how long Hunter will be away from the club.

"It's a personal matter," Scioscia said. "We're going to go day-to-day, and we'll just see where it is. That's all I'm going to say."

Darius Hunter is one of Torii Hunter's three sons who played on the Prosper High football team last season.

All three sons, including Torii Jr. and Monshadrik "Money" Hunter, are considered Division I football prospects, with Torii Jr. considering Stanford and Darius Hunter interested in playing at Oregon, according to his father. Darius Hunter, a receiver last season, reportedly attracted interest and scholarship offers from Texas Tech, SMU and West Virginia, among others.

Hunter flew back to California with the Angels on Sunday night from the Dallas-Fort Worth area, where they faced the Rangers last weekend. But Hunter left Angel Stadium several hours before Monday's game against the Oakland Athletics.

Hunter sat out Sunday's game, but would have been in the Angels' lineup Monday night, Scioscia said. Mark Trumbo took Hunter's spot in right field for the second straight night.

The 36-year-old Hunter is a four-time All-Star, a nine-time Gold Glove winner and the Angels' clubhouse leader and unofficial captain. He's batting .256 with five homers and 15 RBIs this season, but has been in a slump with just two hits in 31 at-bats over Los Angeles' previous nine games before Sunday, including an 0-for-20 skid.

The Angels called up Ryan Langerhans to replace Hunter on the roster, but Trumbo and Peter Bourjos are likely to absorb most of Hunter's playing time. Trumbo has played several positions since Albert Pujols took his spot at first base, but the second-year pro still leads the Angels with six homers and 16 RBIs despite playing in just 26 of their 35 games.

The speedy Bourjos usually has been left out of the Angels' lineup in recent days, making just three starts since April 29 after beginning the season as Los Angeles' starting center fielder. He was on the bench again Monday, with heralded prospect Mike Trout again playing in center.