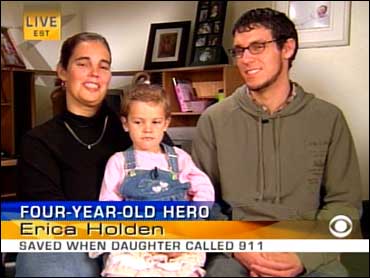 A four-year-old Utah girl is being hailed a hero for coming to her mother's rescue.

Jessica Thomas calmly dialed 911 after her mom was knocked unconscious by a fall while removing Christmas decorations outside their Taylorsville home.

Jessica went outside and found her mother, who'd slipped off a ledge.

When she called 911, Jessica described her mother as asleep, with a hurt head.

When firefighters arrived on the scene, they found Erica Holden in the bushes of their yard. Holden was airlifted to a hospital.

"It was the first helicopter ride I've ever had in my life, and not one I would suggest," Holden

"She told me that her mom fell; that she was outside," the 911 dispatcher, Woody Bartlett, recalled for Storm. "She gave me her address and, basically, all the information that we needed to get medical crews on the way there.

He kept her on the phone for 12 minutes.

"We had to do a cell phone trace to get the address," Bartlett continued. "And once we were able to get that, we sent medical crews and police right away. The sheriff's office was the first one to arrive and he's the one that requested the helicopter to be sent out.

"She was very calm. She was very, I believe, unaware of the severity of the situation. So she was calm and very coherent about the whole thing."

Holden says it was no accident that Jessica knew what to do: "I have two other children besides Jessica, and we actually do monthly drills. We have 911 drills. We also have stop-drop-and-roll drills and we have, you know, the basic where to meet in case of a fire.

"She's amazing. I am so proud of her. Just the fact that she stayed on the phone with anybody for 12 minutes just amazed me."