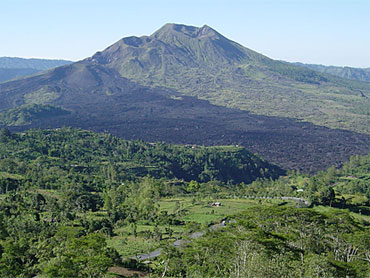 A Swedish tourist fell to his death into the crater of an active volcano Wednesday on the Indonesian resort island of Bali.

The 25-year-old man and two friends were on a pre-dawn hike along the rim of the crater of 5,633-foot Mount Batur when he fell in, local police chief Capt. Made Oka said.

Rescuers spotted the man's body inside the dry crater at a depth of about 500 feet, Oka said. Officials believe the man did not survive the initial impact of the fall.

"Rescuers are now in the process of evacuating the body," Oka said, adding that poor weather around the crater may slow the efforts.

Mount Batur, which has erupted 26 times since 1840, is about 40 miles northeast of the provincial capital, Denpasar. It last erupted in 2000 and is considered an active volcano. It regularly lets off steam.

Oka said the route the tourists were hiking is considered safe and accidents there are uncommon.