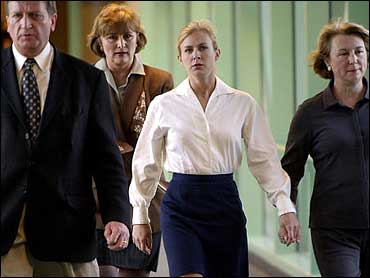 As a child model, she was picture perfect. When she performed in "The Nutcracker," she was the perfect choice to play the Sugar Plum Fairy. Years later in college, she earned nearly perfect grades and was named the top chemistry student in her class.

And Kristin Rossum, according to prosecutors, almost got away with the perfect murder.

Toxicologist Rossum killed her husband with what prosecutors called "the perfect poison" and then, borrowing from a scene in her favorite movie, scattered rose petals around his body.

She almost got away with trying to make it look like a suicide, prosecutors said.

But on Tuesday, on what would have been her husband's 29th birthday, Rossum was convicted of murdering Greg de Villers, 17 months after they were married.

Among the evidence against her, a receipt was introduced at her trial showing she bought a single rose the day of her husband's death.

She faces a life prison term without a chance of parole. Formal sentencing is set for Dec. 12.

Rossum, a former coroner's office toxicologist who repeatedly professed her innocence on the stand during her three-week trial, appeared to buckle as jurors left the courtroom following the verdict.

A gag order prevented attorneys and anyone connected to the case from commenting. Jurors refused to speak with reporters before leaving the court.

Rossum claimed her husband took his own life because he was despondent that she was about to leave him.

She said she found him unconscious in their bed on Nov. 6, 2000, and that he had told her earlier that day he took a combination of old prescription drugs she had bought years earlier.

Paramedics found the body of the 26-year-old biotech worker with red rose petals scattered over him and a wedding photo of the couple nearby.

"If Jerome hadn't called there might not have been a trial," Hendren said in his closing rebuttal.

Jerome told police Greg was not suicidal, and most of all, he hated taking any form of drugs.

An autopsy found de Villers died of an overdose of fentanyl, a powerful opiate commonly used as a painkiller for cancer patients.

Investigators soon learned Rossum had been having an affair with her supervisor at the San Diego County Medical Examiner's Office, where she worked as a toxicologist. They also learned she was addicted to methamphetamine.

Prosecutors accused Rossum and her lover, chief toxicologist Michael Robertson, of conspiring to kill de Villers because he had threatened to expose Rossum's addiction. That, they said, would have revealed Rossum had been stealing meth from the coroner's lab.

Robertson, who returned to his native Australia last year, has not been charged and did not testify. Prosecutors called Robertson, who was an expert in fentanyl, an unindicted co-conspirator.

But what the two hadn't anticipated, Hendren said, was that de Villers' tissue samples would be sent to an outside lab, which discovered massive amounts of fentanyl in his blood.

Fentanyl, some 80 times more powerful than morphine, is an odorless, colorless chemical that dissolves in liquids. It's bitter taste can be easily masked.