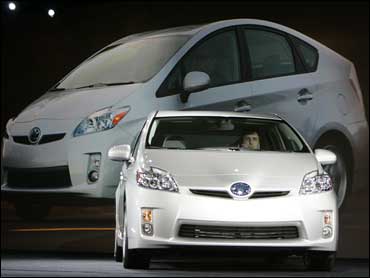 The result for the April-June quarter underlines that Toyota Motor Corp. is getting some traction from aggressive cost-cutting. Analysts surveyed by Thomson Reuters had forecast a fiscal first quarter loss of 210 billion yen.

Toyota, which dethroned General Motors Corp. as the world's top selling automaker in 2008, raised its global vehicle sales forecast for the fiscal year by 100,000 to 6.6 million vehicles. The increase reflected improved sales in Japan, partly because of government measures to boost green car sales.

The better forecast is still markedly below the 7.57 million vehicles Toyota sold worldwide for the fiscal year ended March, showing how far Toyota has to go to stop the flow of red ink, now into its third straight quarter.

Toyota sold 1.4 million vehicles around the world during the quarter, a decrease of 785,000 vehicles from a year earlier. Quarterly sales dropped 38.3 percent to 3.836 trillion yen ($40.4 billion) as vehicle sales slipped in almost all regions, including North America, Europe, Japan and the rest of Asia.

Other Japanese automakers have also reported better-than-expected earnings, with No. 2 Honda continuing to stay in the black, bucking expectations for losses. Analysts say Toyota, because of its bigger size, may need longer for a full recovery.

"The damage was great at Toyota because it was heading toward aggressive expansion with its foot slammed on the accelerator," he said, comparing the global financial crisis to a car wreck.

The growing popularity of environment-friendly vehicles has given Toyota some respite from the meltdown in auto demand. The automaker's new Prius gas-electric hybrid has been the top-selling model in Japan, for two months straight, the first time a hybrid clinched that spot, and is reportedly on track to take that spot again for July.

The last fiscal year, Toyota posted its worst loss ever in its seven-decade history, running up 436.94 billion yen of red ink. For the April-June quarter last year, it had posted a 353.6 billion yen profit.

Toyota had appeared almost unstoppable before the global financial crisis, with sales booming on its reputation for mileage and quality.

It planned to sell 9.85 million vehicles in calendar 2008, but its annual sales ended up dropping for the first time in a decade to just short of 9 million vehicles, as the financial crisis on Wall Street morphed into a global recession.

The automaker has aggressively cut costs to ride out the downturn - slashing jobs and production, trimming managerial pay, reducing investment and foregoing travel and other expenses.

"Although we were able to make certain improvements in fixed cost and cost reduction efforts, the decline in vehicle sales and the appreciation of the Japanese yen had a severe impact on our earnings," said Toyota Senior Managing Director Takahiko Ijichi.

Toyota, based in Toyota city, central Japan, lost 140 billion yen ($1.5 billion) during the quarter ended June 30 because of the appreciation of the yen. It lost another 650 billion yen ($6.8 billion) in operating income because of miserable auto sales.

Other Japanese automakers are also reporting signs that the worst may be over.

Honda posted a 7.5 billion yen ($79.8 million) profit for the April-June period, and raised forecasts for the full year on optimism auto sales will improve.

Earlier this year, Toyota chose Akio Toyoda, the grandson of the automaker's founder, as its new president in an effort to use his charisma to bring the ranks of workers, dealers and suppliers together.

Toyoda has said the automaker will be making more managerial decisions by region, to stay nimble despite its size but has yet to give details of a turnaround strategy.