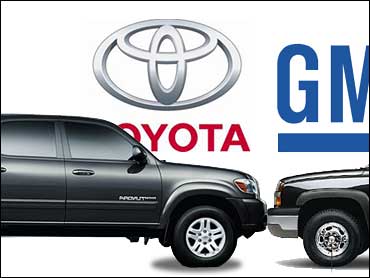 Toyota announced Tuesday a global production target of 9.06 million vehicles for next year, and analysts said it's only a matter of time before the Japanese automaker overtakes struggling U.S. rival General Motors as the world's top automaker.

GM also was reeling from a report that it was continuing to lose U.S. market share to Asian rivals in the first 11 days of December. That report, released Monday by the marketing and consulting firm J.D. Power and Associates, showed GM's U.S. market share down to 21.7 percent, compared to 22.4 percent at this time last year. Toyota's share was up to 17.1 percent from 15.5 percent last year.

GM isn't the only U.S. automaker cutting costs. Ford Motor Co., which reported a third-quarter loss of $284 million, has said it plans to eliminate about 4,000 white-collar jobs in North America early next year as part of a restructuring plan. Ford Chairman and CEO Bill Ford has said he plans to announce U.S. plant closings and layoffs in January.

Toyota Motor Corp.'s plan, announced by President Katsuaki Watanabe, marks a 10 percent increase from the 8.25 million vehicles Toyota expects to produce this year, and goes neck-and-neck with what General Motors estimates as its production this year of about 9 million vehicles.

Yasuaki Iwamoto, auto analyst with Okasan Securities Co. in Tokyo, says Toyota will likely beat GM in two or three years, if not next year, because Toyota's momentum for growth is so much stronger than GM's.

"There's no mistake, Toyota is headed to the top," he said in a telephone interview. "Toyota's strength lies in its powerful products."

Toyota Motor Corp., which has built a reputation for reliable cars and superior gas mileage, has been growing at a time when General Motors has been stumbling, losing $1.6 billion in the third quarter and seeing its market share in North America chipped away by Asian automakers.

General Motors has announced drastic cost cuts, including trimming 30,000 jobs, or 27 percent of its North American manufacturing jobs, and the closure of 12 facilities by 2008.

One reason for Detroit-based General Motors' troubles has been the huge burden of costly health-care benefits for workers and retirees.

"Even in North America, (Toyota's) factory labor costs are lower because it pays a bit less for labor and is not encumbered by excessive benefit costs," said Peter Morici, University of Maryland economist and auto industry expert.

But Watanabe played down Toyota's apparently imminent No. 1 status in the auto industry.

"We try to prepare our production and sales to respond to customer needs in every region," he told reporters, while refusing to comment on the recent woes of GM. "I am not thinking much about whether we will become No. 1 in the world as a result of that."

Watanabe also brushed off fears about a possible U.S. political backlash of protective sentiment that intensified in the 1980s, noting that Toyota has boosted production and parts purchasing in the United States, and become a good corporate citizen.

Morici believes GM, Ford Motor Co. and the United Auto Workers, the U.S. labor union, enjoy far less public sympathy than they did in the 1980s. If the government does try to protect U.S. automakers, "it will have to be veiled," Morici said in an e-mail.

Much of Toyota's growth has come from its expansion overseas, not only in North America but in emerging markets such as China and Russia. It hopes to produce 4.99 million vehicles in Japan in 2006, up 8 percent from this year, and 4.07 million overseas, up 12 percent.

Other Japanese automakers are also in good health.

Honda on Tuesday projected global sales in 2005 will have risen 5 percent from a year earlier to a record 3.35 million vehicles, while vehicle production worldwide will have gone up 7.2 percent from last year to 3.41 million cars.

Koji Endo, auto analyst with Credit Suisse First Boston in Tokyo, praised Toyota's "positive cycle" of having ample money to invest in facilities and research that in turn allows it to produce cars that appeal to the market and cut costs, leading to even more profits.

"It's bound to happen either next year or the year after," Endo said of Toyota's outstripping General Motors. "But perhaps there isn't much point to the question. It doesn't make much sense to be comparing vehicle production numbers between the world's most profitable automaker and one that's on the verge of collapse."

Toyota shares, which have gained about 50 percent from the beginning of this year, closed up 0.7 percent at $50 on the Tokyo Stock Exchange.