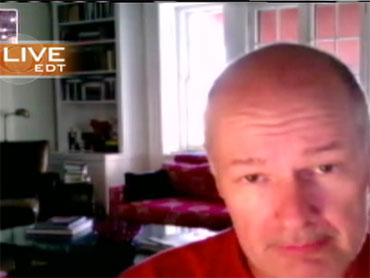 Holiday shoppers who got an early start buying children's products may have bought potentially dangerous items that have since been recalled, the government said Tuesday, issuing its annual holiday safety warning.

"I remember pumping it up and the next thing I knew I was hit," Ashley tells CBS News Correspondent Wyatt Andrews.

Playing in the front yard last spring, 16-year-old Ashley was pumping up an air rocket toy when the rocket launched -- by accident -- directly in to her left eye. She has permanently lost peripheral vision and is still in pain.

"I still get a headache and I still see a green flash in my eye at least once or twice a day," says Ashley.

Andrews reports that the air rocket is one of the eight brands of toys recalled this year by the Consumer Product Safety Commission, the CPSC.

Commission Chairman Hal Stratton warns that parents, especially parents who did holiday shopping early, should be aware of these recalls. The number one hazard, he says, are toys for infants that are illegally designed, with small breakable parts.

The U.S. Public Interest Research Group also released its annual "Trouble in Toyland" report, warning that the greatest toy danger still comes from small balls, balloons and toys with small parts that children can choke on. The group said such toys are still widely available and often lack warning labels.

The group also said its survey of Internet toy retailers found that almost none post the choke hazard warnings that are required for toys sold in stores.

The safety commission advised that consumers should look for toys with sturdy construction and parts that don't come loose; avoid electric toys with heating elements or sharp edges for children under 8; read warning labels; and immediately discard plastic wrappings that could lead to children suffocating.

The Lion & Lamb Project, a Maryland group that monitors violence in entertainment, issued a list of toys it says are too violent, including several video games, action figures and toy weapons.

"We give kids mixed messages when we tell them that violence is bad but then give them a toy machine gun," said Daphne White, the group's director.

Lion and Lamb puts an emphasis on video games, because of their increasingly violent themes. The group says so-called "first person shooters" involve little in the way of creativity. White says all games are "educational" -- but the question is, what do we want to teach children.

The government has cracked down hard this year on toy importers it sees as repeat offenders. That is, importers who have already been fined for bringing in dangerous toys but who keep the shipments coming anyway.

As part of the crack down, the CPSC sends inspectors to import warehouses, checking on toys U.S. customs identifies as suspect.

"The strategy is to hopefully catch the toys before they are out at the retail stores before consumers have a chance to buy them," says Steve Garitta, one such inspector.

But for those who already bought the toys before the CPSC could catch them, it is too little, too late.

"I will never do it again," vows Ashley.

The Estes corporation, the maker of the air rocket, tells CBS News it cooperated with the recall and says the toy has since been replaced with a safer version.

The government's list of children's products recalled in 2002 includes: