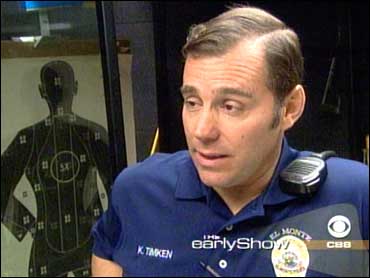 Many people dream of starting over. But the man you are about to meet stands apart from the crowd.

The Early Show series "My New Life" profiles people who have gone through dramatic life changes.

In this installment, Dave Price introduces you to a man who turned his back on the boardroom for a career on the streets of East Los Angeles.

Kurt Timken seemed to have it all: a great education, a great job, loads of money and the prospects of an incredible future.

To the outside world, he had hit life's jackpot. But inside, it didn't feel right until the day he was sworn in at the El Monte Police Department.

As one of El Monte's finest, Timken has worn the police shield with pride for eight years. But most people don't know the significance of another shield in his life: the Harvard University shield.

Kurt Timken was trained to work in the boardroom, not a squad car. His family founded and still runs The Timken Company, ranked on the Fortune 500 list, and worth over $3 billion.

As a fifth-generation heir to the family throne, Timken earned his MBA at Harvard and was poised to take the reigns. But after six years in the business world, he changed his life's path.

"A series of life-changing things hit at once,"

While Timken's decision was shocking to most, it made sense to those who knew him best.

"He saw himself as having a skill set that he could give something back to the world, to the community," said Timken's Harvard friend, Clive Holmes. "He really thought that there were avenues for him to achieve that, but those avenues weren't necessarily the corporate role that everybody expected him to do."

Timken's academic pedigree didn't help him land his dream job. In fact, it slowed him down. Price says the FBI and nearly a dozen police departments rejected Timken, until he landed at the El Monte Police Department.

The officers there were not immediately convinced.

"Like everyone that probably interviewed him, the first thing you thought was that he's overqualified," recalled Sgt. Dan Burlingham. "You kind of question why he really wanted to get involved in law enforcement."

But his colleagues on the force quickly realized he was a cop, just like the rest of them.

"Kurt's a good guy," said his partner on the police force, Roger Cobian. "He loves people and he truly and genuinely wants to help. And it's nice to see him doing it every day."

Timken's greatest impact on this community has been helping those who once thought they had no future.

He helped start the Queens Care Clinic tattoo removal program, which has helped thousands of former gang members, such as 27-year-old Damian, look at life with a renewed sense of promise.

"A lot of us are in the streets without hope," he told Price. "And for them to help us out, really means a lot."

It means a lot to Timken, too. The squad car is a long way from the ivied walls of Harvard, but being a cop is what Timken considers his privilege, rich in rewards.

"If you can take a very bad guy or girl off the street, it's an immensely rewarding feeling at the end of the day," he said. "If you've prevented a crime from happening, amazing feeling. If you've changed a life for the better … that's pretty huge.

"I have a different form of good here. It may not be a private plane or a first class ticket, but it's a great ride."

Price called Timken's father to hear how he feels about his son's dramatic career change. It turns out the apple didn't fall far from the tree.

William Timken told Price he followed his son into public service. He is now the U.S. ambassador to Germany.