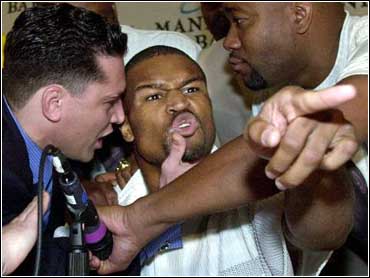 In boxing, it's usually not considered good etiquette to punch the promoter. Unless it helps sell tickets, of course.

Ross Thompson left both promoter Gary Shaw and Fernando Vargas bleeding from the mouth Thursday after a wild melee in which both he and Vargas threw punches just as a news conference to promote their Saturday fight was about to begin.

Now, Thompson can only hope ticket sales improve to offset the fine he will probably get from Nevada boxing officials for apparently starting the confrontation.

Thompson himself was knocked from the dais by a left hook from Vargas as the two fought briefly before finally being separated.

The fight was apparently sparked by Thompson's feeling that no one was respecting his chances in his fight against Vargas for the IBF 154-pound title.

"It's a rage built up in me from the disrespect I've been getting," Thompson said.

Vargas said Thompson will pay in the ring for his actions.

The altercation occurred as Thompson got on the dais for the news conference and walked toward Vargas, shouting at him. Vargas stood up, and Thompson threw a right hand that caused blood to trickle out of the champion's mouth.

Vargas threw a left hook of his own and Thompson was knocked off the dais, but got back up and threw a punch that hit the promoter, Shaw, in the mouth.

Blood streamed out of Shaw's mouth as security guards finally came in and restored order.

"His aim is not that good," Shaw said of Thompson's punch toward Vargas.

After order was restored, the news conference continued. But when Thompson's turn to talk came, his microphone was turned off after several minutes of ranting and raving, and he eventually stormed out of the room.

"He must have been on something," Vargas said. "I could tell he was scared."

Thompson (24-3-1, 16 knockouts) had been established as a 30-1 underdog in the fight, which is a mandatory defense of the IBF junior middleweight title for Vargas (19-0, 17 knockouts).

Ticket sales had been slow for the bout at the Mandalay Bay, which also features an IBF welterweight title fight between Vernon Forrest and Raul Frank.

"It might have helped sell some tickets," Shaw said, still nursing his sore lip.