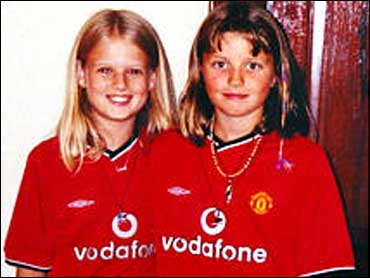 The announcement brought to a chilling end a two-week manhunt that has transfixed Britain, since the girls disappeared from their rural hometown of Soham, near Cambridge on Aug. 4.

"It may be some days yet before we are able to positively identify the two bodies," said Deputy Chief Constable Keith Hoddy outside the town's Church of St. Andrew, where hundreds of residents had gathered earlier in the day to pray for the girls and their families.

"However, we are as certain as we possibly can be tonight that they are those of Holly and Jessica," he added.

He said the girls' parents had been told the news and then called on the assembled journalists to hold a moment of silence as a mark of respect.

Hoddy then read a statement from Jessica's parents, Sharon and Leslie Chapman, in which they thanked friends, family and police for their support and kindness and appealed for privacy.

Holly's parents, Nicola and Kevin Wells, said in a statement read out by Hoddy that they were "still numb after losing our gorgeous daughter."

Police signaled Saturday that they had given up hope of finding Holly and Jessica alive when they arrested two people, reportedly school workers, on suspicion of murder.

The anguish in the children's close-knit community grew a few hours later when detectives said they had discovered two bodies in a wooded area alongside a dirt path in a nature reserve 7 miles (11 kms) away.

Despite police declining to reveal details, including the ages and sex of the dead, residents feared the worst and left floral tributes outside the church and near the woods Saturday and throughout the day Sunday.

"May you rest in peace. God bless you and your families," read a message attached to one bouquet.

Police have not released the suspects' names, but news reports identified them as Ian Huntley, a caretaker at the local secondary school, and his partner Maxine Carr, a former teaching assistant who worked with Holly and Jessica's primary school class until July.

In the British legal system, suspects are not charged at the same time they are arrested, and the pair have not been formally accused. Police can apply for a further 24 hours, after which they must either be released or charged.

Detectives would not say publicly whether Huntley and Carr were the suspects, but have searched their home, which stands on the grounds of the girls' primary school, and the school where Huntley worked.

News reports said that until they were taken in for questioning, Huntley and Carr had been eager participants in the search for Holly and Jessica.

Huntley reportedly told officers shortly after the hunt began that he had seen the girls just before they vanished, when they walked past his house as he washed his dog. He emotionally recounted his story for journalists and the television cameras.

"I must have been one of the last people to see them alive," he told reporters.

Carr, who was reportedly close with both girls, told the cameras she would always keep a card Holly had drawn for her on the last day of school.