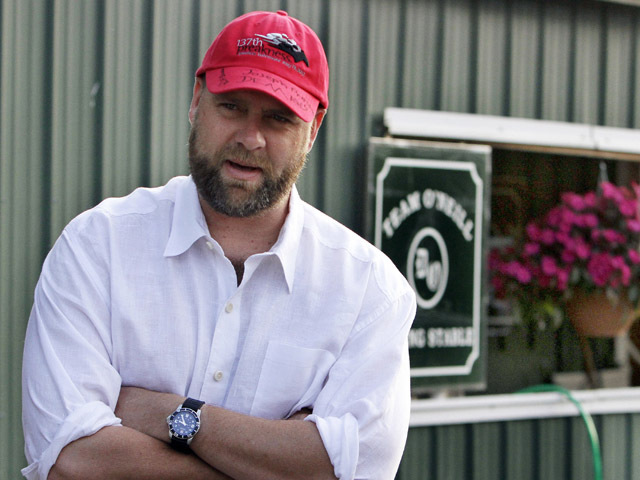 (AP) Despite vigorously denying he gave one of his horses an illegal performance-enhancing mixture, trainer Doug O'Neill was suspended 45 days — a ban that won't take effect until after his superstar colt, I'll Have Another, tries to win the Triple Crown.

After a nearly two-year legal battle, California racing officials agreed with O'Neill but still found fault because of a rule that says trainers are ultimately responsible for horses in their care.

The ruling Thursday doesn't prevent O'Neill from saddling his Kentucky Derby and Preakness winner in the Belmont Stakes on June 9.

The suspension and $15,000 fine — which O'Neill can appeal — come in the final weeks of I'll Have Another's attempt to become horse racing's 12th Triple Crown winner and first since Affirmed 34 years ago. The colt trained by O'Neill won the Derby on May 5 and took the Preakness on Saturday.

"I plan on examining and reviewing all of my options following the Belmont Stakes, but right now I plan on staying focused on preparing for and winning the Triple Crown," O'Neill said in a statement.

The seven-member California Horse Racing Board met in closed session Thursday at Betfair Hollywood Park in Inglewood, Calif., to consider the recommended decision of a hearing officer in O'Neill's case. The board agreed with the officer's recommendations, which included the maximum punishment and fine for the trainer, who turned 44 on Thursday.

While elevated carbon dioxide is associated with "milkshaking," the officer agreed with O'Neill that his horse Argenta had not been fed a mixture of bicarbonate of soda, sugar and electrolytes that enhances performance and combats fatigue. The officer did not indicate what might have caused the overage.

"I'm gratified that the CHRB found that I did not "milkshake" a horse or engage in any intentional conduct that would result in an elevated TC02 level," O'Neill said.

The penalty comes at a time when racing is under heavy scrutiny for the way horses are prepared for their races.

"I know I didn't milkshake a horse. None of us around the barn milkshaked any horses," O'Neill said Wednesday. "You got to have rules and I respect rules, but when you get faulty science involved, it costs a lot of money unfortunately, but you've got to fight it and that's what we're doing."

O'Neill was originally suspended 180 days by the racing board after Argenta tested in excess of the permitted level of TCO2 — a Class 3 violation — after finishing eighth in a race at Del Mar on Aug. 25, 2010. The horse is co-owned by Mark Verge, the CEO of Santa Anita race track and O'Neill's childhood friend.

But the hearing officer recommended that 135 days be stayed as long as O'Neill doesn't have any Class 1, 2 or 3 medication violations in any state during an 18-month period.

It was O'Neill's third total carbon dioxide violation in California and fourth in his career. In 2010, he was suspended and fined for a similar offense involving one of his horses that ran in the Illinois Derby at Hawthorne Race Course in suburban Chicago.

The officer found there were no suspicious betting patterns in the 2010 race and that there was no evidence of any intentional acts on the part of O'Neill in connection with the incident.

However before the hearing, the parties had stipulated that the Ken Maddy Laboratory at UC Davis detected an excess level of TCO2 in the horse's blood sample, and CHRB Rule 1887 states a trainer is ultimately responsible for the condition of a horse, so O'Neill was punished.

CHRB executive director Kirk Breed will decide when O'Neill's suspension will begin, but it will be no sooner than July 1.

The Jockey Club has said that elevated total carbon dioxide levels, regardless of cause, are violations of the rules and penalties for excessive TCO2 are severe. It urges trainers and their veterinarians to work closely to identify any procedure or practices that may elevate such levels in horses.