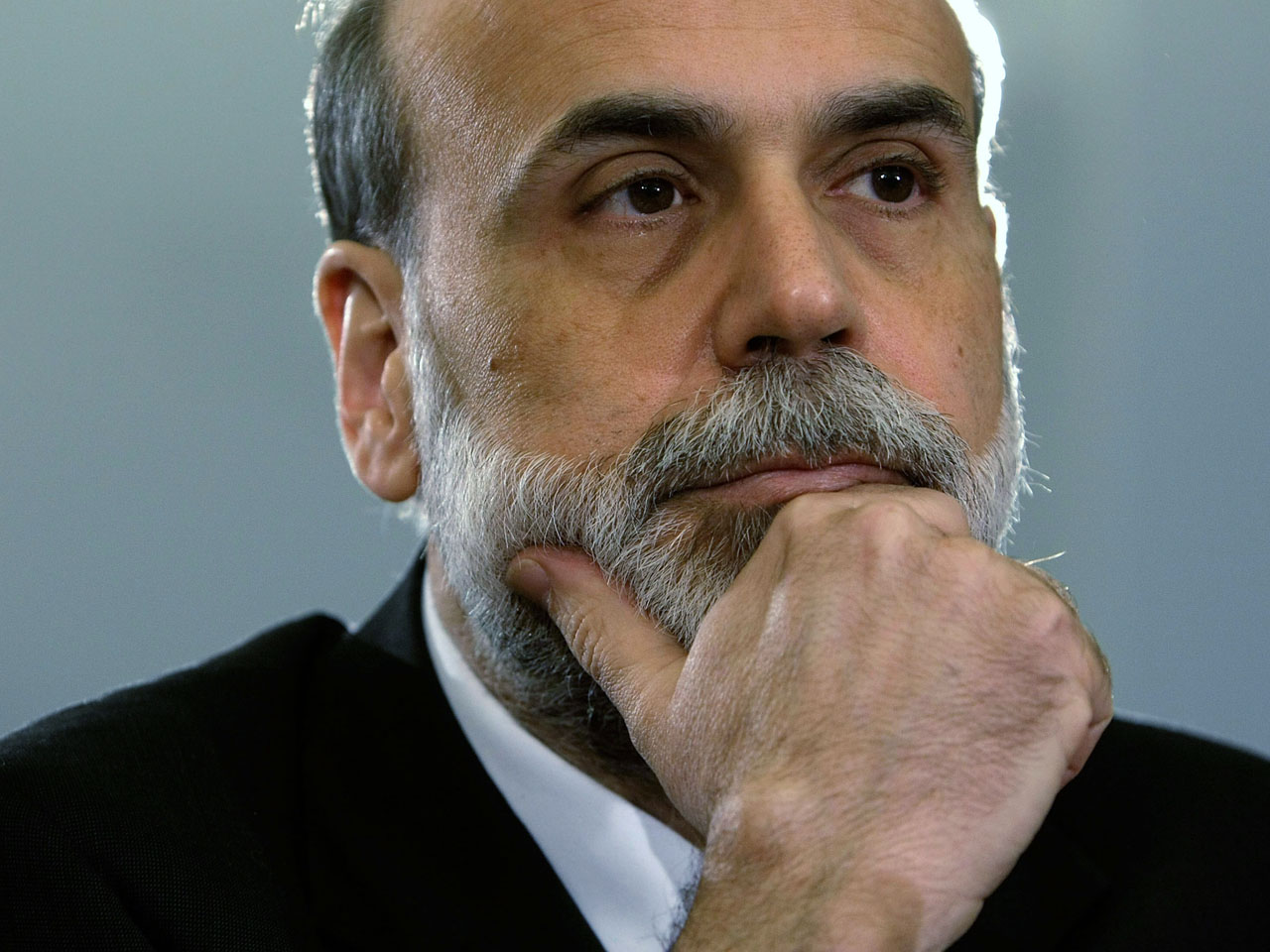 WASHINGTON - The Federal Reserve agonized throughout 2008 over how far to go to stop a financial catastrophe that threatened to pull the U.S. economy into a deep recession, transcripts of its policy meetings that year show.

"We're crossing certain lines. We're doing things we haven't done before," Chairman Ben Bernanke said as Fed officials met in an emergency session March 10 and OK'd never-before-taken steps to lend to teetering Wall Street firms, one of a series of unprecedented moves to calm financial markets and aid the economy. "On the other hand, this financial crisis is now in its eighth month, and the economic outlook has worsened quite significantly."

The crisis had been building for months. In an emergency conference call Jan. 21, Bernanke had rallied support for a deep cut in interest rates. He warned that market turmoil illustrated investors' concerns that "the United States is in for a deep and protracted recession."

Bernanke apologized to his colleagues for convening the call on the Martin Luther King holiday. But he felt the urgency of the crisis required the Fed to act before its regularly scheduled meeting the next week. The Fed approved a cut of three-fourths of a percentage point in its benchmark for short-term rates.

On Friday, the Fed released hundreds of pages of transcripts covering its 14 meetings during 2008 -- eight regularly scheduled meetings and six emergency sessions. The Fed releases full transcripts of each year's policy meetings after a five-year lag.

The 2008 transcripts cover the most tumultuous period of the crisis, including the collapse and rescue of investment bank Bear Stearns, the government takeover of mortgage giants Fannie Mae and Freddie Mac, the fateful decision to let investment bank Lehman Brothers collapse in the largest bankruptcy in U.S. history and the bailout of insurer American International Group.

For all its aggressive actions in 2008, the transcripts show the Fed struggling at times to grasp the speed and magnitude of the crisis. Bernanke and his top lieutenants often expressed surprise that they weren't succeeding in calming panicky investors.

As late as Sept. 16, a day after Lehman Brothers filed for bankruptcy, Bernanke declared, "I think that our policy is looking actually pretty good."


The Fed declined at that meeting to cut the benchmark short-term rate it controls. Just three weeks later, after the Fed had  rescued AIG, Bernanke convened an emergency conference call. In it, he won approval for a half-point rate cut.

The tone of the meetings shifted during the year as the crisis worsened. In January, Frederic Mishkin, a Fed governor, missed an emergency conference call because he was "on the slopes."

The transcripts reveal the arguments Bernanke deployed to marshal support for the unorthodox policy actions -- including support from Janet Yellen, who succeeded Bernanke this month as Fed chair. At the time, Yellen was head of the Fed's San Francisco regional bank.

At an Oct. 28-29 Fed meeting, Yellen noted the dire events that had occurred that fall. With a nod to Halloween, she said the Fed had received "witch's brew of news."

"The downward trajectory of economic data," Yellen went on, "has been hair-raising -- with employment, consumer sentiment, spending and orders for capital goods, and homebuilding all contracting."

Market conditions had "taken a ghastly turn for the worse," she said. "It is becoming abundantly clear that we are in the midst of a serious global meltdown."

Yellen had downgraded her economic outlook and was predicting a recession, with four straight quarters of declining growth. The recession was later determined to have begun in December 2007. It lasted until June 2009.

The Fed's moves failed to prevent colossal damage from the crisis. The U.S. economy sank into the worst recession since the 1930s. But Fed officials and many economists have argued that without the Fed's aggressive actions, the Great Recession would have been more catastrophic, perhaps rivaling the Great Depression.

Even as they grappled with a collapsing financial system and an economy in freefall, Fed policymakers wondered how history would judge them. Bernanke, admitting that they were operating in "the fog of war," said in late October: "I would defend what we've done in terms of the general direction, acknowledging that execution is not always perfect and that communication is not always perfect."

The Fed's efforts to cushion the economy from the burst housing bubble and subprime mortgage crisis had begun in 2007. The Fed cut a key short-term rate three times that year. The cuts totaled a full percentage point and took the rate from 5.25 percent to 4.25 percent at the end of 2007.


Then, at an emergency meeting on Jan. 22, 2008, the Fed slashed the rate again by three-fourths of a percentage point, responding to a plunge in global stock markets that had escalated fears of a recession. It marked the first time the Fed had changed rates between its regularly scheduled meetings since 2001, when it sought to protect the economy from the shocks of the Sept. 11 terrorist attacks.

By the end of 2008, the Fed made eight rate cuts, leaving the funds rate on Dec. 16 of that year at a record low near zero. It remains there today. Many economists don't think the Fed will start raising rates until late 2015 at the earliest.

The Fed that year also launched other never-before-tried programs to get money flowing to parts of the economy that were desperate for credit.

Yet Fed policymakers fretted over the unprecedented steps they were taking. Thomas Hoenig, president of the Fed's Kansas City regional bank, expressed concern at a July 24 meeting that the Fed might continue its extraordinary lending to Wall Street firms into 2009.

"This seems to take us away from, rather than toward, backing out -- and I really am a bit concerned about that," Hoenig said.

Bernanke countered that the Fed was "not in this business indefinitely ... But at the moment, conditions do not seem considerably better, and I don't think that at this moment we really should be reducing our support to the market."

Jeffrey Lacker, head of the Richmond Fed, worried at the March 10 meeting about accepting mortgage bonds as collateral for Fed loans to Wall Street firms. "This proposal crosses a bright line that we drew for ourselves in the 1970s in order to limit our involvement in housing finance," Lacker said.

But Timothy Geithner, then head of the New York Fed, countered that the Fed was a stronger institution than in the '70s. "We need to be flexible and creative in the face of what are really extraordinary challenges," Geithner said.

On Oct. 7, Bernanke called an emergency conference call to seek approval for a half-point cut in the Fed's benchmark rate. Five other central banks in Europe and Canada had agreed to take similar steps.

"We're having a lot of meetings off the regular cycle," Bernanke said. "I think it's just a sign of the extraordinary times that we're currently living through. ... Virtually all the markets -- particularly the credit markets -- are not functioning or are in extreme stress."

The proposal was unanimously approved, a reflection of rising concerns about the economy and markets. Even so, some Fed officials worried that it still wouldn't be enough.

"I don't think that anything that we do today -- cutting the funds rate 50 basis points or whatever -- is going to make the next couple of months in terms of the overall economy any less painful," said Charles Plosser, president of the Philadelphia Fed.

Plosser said it was important for the Fed to invoke broader economic concerns to justify its actions beyond the turmoil in the stock market.

"I feel rather unconfident about predicting the path of rates six months in the future," Bernanke replied, "because I'm not quite sure what is going to happen tomorrow at this point."