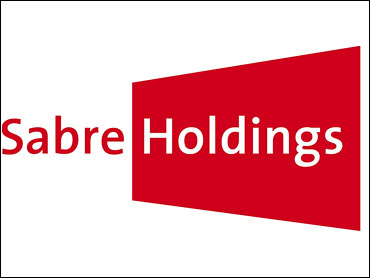 Travel-reservations system operator Sabre Holdings, parent of the online service Travelocity.com, said Tuesday it is being acquired by private-equity groups for about $4.5 billion.

Silver Lake Partners and Texas Pacific Group said they will pay $32.75 per share in cash for the company, which connects airline, hotel and car-rental systems with travel agents. They also assume about $550 million in debt.

The deal would require approval by Sabre shareholders.

The purchase price and represents a 7.6 percent premium over Sabre's closing price Monday, when the stock rose more than $2 amid talk of a pending deal.

The buyers said they have equity and debt commitments lined up for the full sale amount.

"We are excited by the opportunity to invest in Sabre given its leadership position in travel technology and distribution and the strength of Travelocity and its other leading online brands," said Karl Peterson, a partner in Texas Pacific Group. He said the buyers would help Sabre build on a strong franchise.

Sabre Holdings said it doesn't expect to make management changes and will remain based in the Fort Worth suburb of Southlake.

Sabre's board of directors recommended that shareholders approve the sale. Chairman and Chief Executive Sam Gilliland said the deal was a good value for shareholders.

Sabre had hired Goldman, Sachs & Co. and Morgan Stanley as financial advisers. The buyers hired Deutsche Bank and Merrill Lynch to advise them and provide financing.

The company started as the reservations arm of American Airlines in the 1960s but now serves many major carriers.

In recent days, published reports said two rival groups of private-equity firms were bidding for Sabre, with Apollo Group leading the other group.

The sale of Sabre to private owners follow a deal last week in which Sabre rival Worldspan was sold to online travel planner Travelport for $1.4 billion. Travelport in turn is owned by The Blackstone Group LP.

Sabre and others who operate travel-reservations systems for travel agents face growing competition from Internet sites that sell travel tickets directly to consumers.

Texas Pacific Group has more than $30 billion of assets under management and has invested in industries including airlines, fast food, retail and technology.