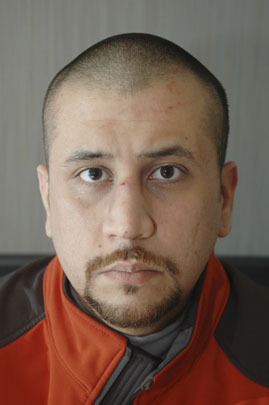 The report, from the day after the shooting, was posted online Monday by Zimmerman's attorney as part of his effort to get the former neighborhood watch volunteer released from jail while he awaits trial in Martin's February shooting death.

The report states that the reason Zimmerman sought medical attention the day after the shooting was to get a note from a doctor for work. It indicates that he had two lacerations to the back of his head, one two centimeters long, and one half a centimeter long. They did not require stitches and he did not complain of any slurred speech or dizziness.

The physician doing the examination noted that it was "likely" Zimmerman had a broken nose, but there is no record of X-rays or other tests to confirm the diagnosis.

According to the report, the doctor recommended Zimmerman visit an ear, nose and throat specialist, but he declined.

In the medical report, physician assistant Lindzee Folgate wrote that Zimmerman, "Admits to occasional nausea when thinking about the violence last night, but denies abdominal pain."

The documents released also include witness statements and law-enforcement interviews with Zimmerman.

Circuit Judge Kenneth Lester is expected to decide Thursday whether to release Zimmerman on bond, according to a court spokeswoman. His original bond was revoked last month after Lester ruled that Zimmerman and his wife had been untruthful about their finances at a bond hearing in April.

Defense attorney Mark O'Mara estimated that he submitted about eight to 10 hours of material for the judge to review during last week's bond hearing.

Zimmerman was prescribed pain medication for his injuries. A medication report also said that in the weeks before the shooting he had been given prescriptions for Adderall, used to treat attention deficit

and hyperactivity disorder, as well as an insomnia medication.

Zimmerman has been charged with second-degree murder for fatally shooting the unarmed 17-year-old Martin on Feb. 26 at a gated apartment community in Sanford. Zimmerman has pleaded not guilty and claims the shooting was self-defense under the state's "stand your ground" law.

Martin's parents and supporters claim the teenager was targeted because he was black and that Zimmerman started the confrontation that led to the shooting. Zimmerman's father is white and his mother is Hispanic.

Zimmerman told investigators that Martin punched him in the face, pushed him to the ground and repeatedly slammed his head against the pavement before Zimmerman retrieved his gun and shot him.

O'Mara sparred with prosecutors over the suspect's finances during last week's hearing and questioned why his client is in jail at all, arguing that Martin's actions led to his death.

O'Mara ultimately decided against calling his client to the stand last Friday, unlike during the first bond hearing, when Zimmerman apologized to Martin's family.

The defense attorney called Zimmerman's father to testify, and played a chilling 911 call from the Feb. 26 night when Martin was killed. The call includes a disputed cry for help and the fatal gunshot. Robert Zimmerman said he was sure that it was his son's cry. Both of Martin's parents also say that it was their son calling for help before the shooting.