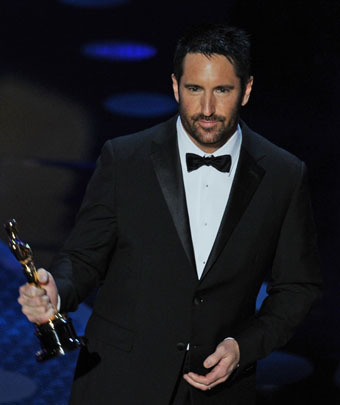 (CBS) The guy who has written lyrics we literally can't print here at CBS News is an Academy Award winner for Best Original Score. Is this a great country or what?

Nine Inch Nails' Trent Reznor composed the score for David Fincher's "The Social Network" with Atticus Ross, who shared the award with him.

"Wow. Is this really happening?" Reznor said as he accepted the award.

Ross and Reznor won the Golden Globe in January for "The Social Network." The pair are also composing original music for Fincher's next film, "The Girl with the Dragon Tattoo," an adaptation of the wildly popular Stieg Larsson novel.