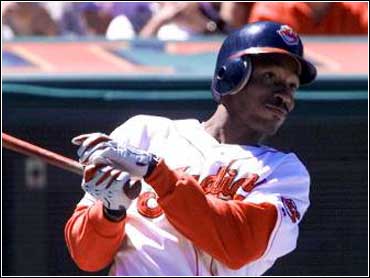 The Seattle Mariners will be glad to get out of Cleveland.

"This streak has been very humbling," Mariners manager Lou Piniella said. "We got pounded here. I'm glad we have an off day tomorrow."

Seattle's first-place lead in the AL West dwindled to two games over Oakland, which won 5-4 at Detroit. The Mariners have allowed at least nine runs in the last seven losses tying a 99-year-old major league record set by the New York Giants, Sept. 3-6, 1901.

The Indians completed a three-game sweep and remained one game behind Oakland in the wild-card race heading into a three-game series with the Athletics that begins Tuesday night at Jacobs Field.

"At this point, every game and every series is important," Lofton said after hitting two homers in a game for the third time but first since June 5, 1995. "We are trying to go out and win every game because that is the only way we are going to stay in this race."

Lofton hit the second pitch from Aaron Sele (13-8) over the right-field wall. That gave him homers in three consecutive games for the first time.

"Kenny is muscling up, man," manager Charlie Manuel said. "He's swinging good and being aggressive at the plate."

Lofton continued his power surge in the third with his 11th homer, a line-drive grand slam down the right-field line that made it 5-0.

Travis Fryman, who went 3-for-4, had an RBI single in the third, and Lofton drew a bases-loaded walk later in the inning to make it 7-0.

Dave Burba (11-5) won for the first time since July 23. The right-hander allowed two runs and 10 hits in seven innings.

"After getting a 9-0 lead, all I wanted to do was go out and throw strikes," Burba said. "At one point on the mound, I thought, 'Why can't it always be this easy?"'

Sele yielded seven runs and seven hits in 2 2-3 innings. Seattle starters fell to 0-6 with a 9.50 ERA during the Mariners' eight-game skid.

Wil Cordero went 4-for-5 with three RBIs. He singled in two runs off Brett Tomko to make it 9-0 in the fourth and added an RBI double in the eighth.

Consecutive run-scoring singles by Jim Thome and David Segui made it 11-0 in the fifth.

John Olerud and Dan Wilson each singled in runs with two outs in the Seattle sixth. Edgar Martinez had a two-run double in the ninth.