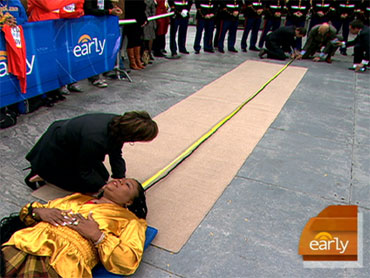 Shrouded in early morning mist, U.S. tanks, Humvees and Apache helicopters roared into the town of As Sadah to deliver a message: Don't let insurgents use your town to attack American forces.

The operation, dubbed Sidewinder, was part of a sweep across central Iraq from the border with Iran to the areas north of Baghdad. It netted one suspected militant and several small caches of weapons.

In all, military officials say they have arrested more than 300 suspects since Sunday in Sidewinder and other operations, but no major fugitives of Saddam Hussein's fallen regime.

"The purpose of the operation is to go in and let the local community know that we will not tolerate their complacency or support for the attacks," Lt. Col. Mark Young, a 4th Infantry battalion commander, said. "We've been repeatedly attacked from the main road. We will not tolerate that."

After dispatching a pair of reconnaissance patrols Monday and establishing a security cordon around As Sadah, four M-1 tanks, two armored personnel carriers and about 10 Humvees entered the village at dawn Tuesday, broadcasting Arab-language warnings to residents to stay inside.

While a pair of Apache helicopters hovered overhead, soldiers stepped out of their vehicles to scour yards and follow up on tips. Searches yielded several AK-47 assault rifles, an anti-tank gun and bags of ammunition.

One town elder, Sheikh Waleed Kareem al-Jailani, insisted outsiders, not locals, were responsible for attacks on U.S. troops that have happened frequently in recent days. He suggested Kurds from northern Iraq — who sided with the United States in the war against Saddam — might have caused the trouble.

Young responded bluntly: "I think it's local people coming to the road, shooting at us and going back home."

Several times during the raid, Young pulled aside local leaders and — through the battalion's Arab translator — warned them they would be viewed with suspicion until the attacks stopped.

"Everyone we meet claims to be innocent," Young told The Associated Press. "Everyone claims it's someone else from another village. But it's the local village and local villagers that allow the attacks to take place."

A swelling insurgency has seen several attacks on U.S. troops every day recently. That's led some to worry that Iraq could turn into a Vietnam-style political and military quagmire.

Despite the show of weaponry and manpower, townsfolk in As Sadah, 35 miles northeast of Baghdad, appeared more bemused than frightened.

Most residents poured into the streets to watch the spectacle, ignoring the orders to stay inside. Youngsters cheered with delight at the sight of Apaches twisting and turning in the air and huge tanks maneuvering through town.

"This is very exciting," said Khaled Hussein, an unemployed 21-year-old. "This is the most exciting thing to happen here in a long time."

A giggling girl in a red dress held a doll with one hand outside her house. Young men gave the thumbs-up to passing American vehicles and foot patrols searching the alleyways and yards.

"As long as they don't force their way into homes, we don't mind the Americans," said Yussef Kamal, a 40-year-old butcher.

The American presence didn't excite all the residents of this lush agricultural town. Sulking young men standing away from the crowds frowned at the U.S. forces. One shook his head and walked away when a reporter approached.

At a nearby town on Sunday, an Apache alerted soldiers that a group of men a couple of miles to the north had dropped a bag and fled.

A team took off on foot into the latticework of narrow alleyways along the canals and palm groves. Soldiers stepped carefully along narrow paths lined with thick vegetation and high walls. They walked past sunflower fields, herb gardens and bushes.

"This is not how I expected Iraq to look," Capt. Lou Morales said as his men peered into doorways and over walls.

Guided by the Apache above and map coordinates below, the soldiers found the plastic bag. It contained about 100 rounds of ammunition, several assault rifle magazines, a wad of cash and jewelry.

Young acknowledged he must navigate tricky cultural waters to establish the most basic facts in the raids.

"There's always the risk of alienating an entire town by blundering in there," he said.