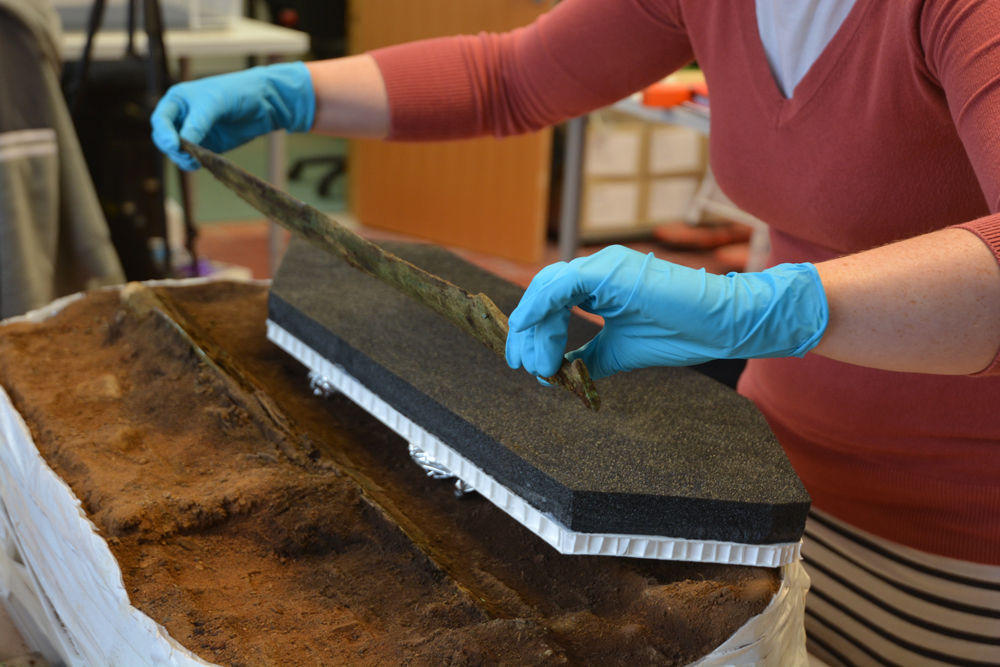 Excavations during the construction of two soccer fields in Scotland have turned up a rare discovery — a Bronze-Age weapon hoard, including a notched bronze sword and a gold-decorated spearhead.

The weapons, which likely date back to between 1000 B.C. and 800 B.C., were found in a pit alongside a Bronze Age roundhouse. All told, archaeologists discovered the remains of 12 Bronze Age buildings during the dig, as well as a much earlier Stone Age hall that probably dates back to the very beginnings of agriculture in Scotland.

“There was no real indication of the wealth of archaeological remains” before the dig, said Ronan Toolis, the commercial director of GUARD Archaeology Limited, the firm that conducted the excavation. [See Images of the Bronze-Age Weapon Hoard]

Gold in the ground

GUARD Archaeology was contracted to do the excavations as part of the standard procedure for new construction; in this case, the council of Angus in Scotland was building a pair of soccer fields in the town of Carnoustie. During the pre-construction excavations, archaeologists turned up pits and postholes in the soil. These features are signs of ancient construction.

“As we were stripping the topsoil to view more of these pits and postholes, we saw this glint of gold beneath the topsoil,” Toolis told Live Science.

The glimmering discovery was made late in the day, so the archaeologists cut a 176-pound (80 kilograms) chunk of earth from the ground that encased the artifacts inside. This block went to the GUARD Archaeology lab for a small-scale excavation that took a full week, Toolis said.

Inside the block was a bronze spearhead, decorated with gold. The spearhead had been bundled with a bronze sword with a lead-and-tin pommel, a bronze scabbard (a sheath for a sword) mount and a chape, the metal fitting at the end of a scabbard. The bundle also included a bronze pin.

There have been very few similar spearheads discovered, Toolis said, including just a couple from Ireland and one in England. Only one other gold-decorated spearhead has been found in Scotland, he said. That one was discovered in 1963, west of the city of Dundee, about 12 miles (19 kilometers) from Carnoustie.

The new discovery is all the rarer because it contains not just metalworks, but organic materials, Toolis said. There are remnants of fur-bearing skin around the spearhead and microscopic fragments of textiles around the bronze pin, he said. There are also pieces of the sword’s wooden scabbard preserved in the bundle. All of these organic artifacts can be radiocarbon dated to pinpoint their age, Toolis said.

The archaeology team also plans to analyze the metals in the weapons to discover where the materials came from. Tin, required to make bronze, is found only in the British Isles, in Cornwall, Toolis said. Lead in the bronze might have come from southern Scotland, and the gold from Ireland, he said. [The 25 Most Mysterious Archaeological Finds on Earth]

The team has found the remnants of 12 Bronze Age buildings, but they aren’t sure whether these buildings made up a Bronze Age village or single homes that were occupied and abandoned over a long period of time. Most archaeological discoveries of Bronze Age dwellings are single homes, Toolis said, so the discovery of a village would be particularly important.

The weapons themselves were likely used, Toolis said. The sword has notches in its blade, and the socket of the spearhead looks worn, as if multiple wooden shafts had been used with it. The weapons appear to have been bundled up and buried for reasons unknown, Toolis said. Typically, weapon hoards of this type are found not under the ground, but in rivers or bogs, where they were deposited as sacrifices, Toolis said.

The roundhouse by which the weapons were buried had been dug into the remnants of a much older, Neolithic structure, the archaeologists found. It was a rectangular timber hall, Toolis said, and the largest Stone Age hall ever found in Scotland.

“One of the things we’ll look at is if this site was continuously occupied from the Neolithic to the Bronze Age, or whether it was occupied and abandoned,” Toolis said.

The researchers completed the excavation portion of the project on Friday.