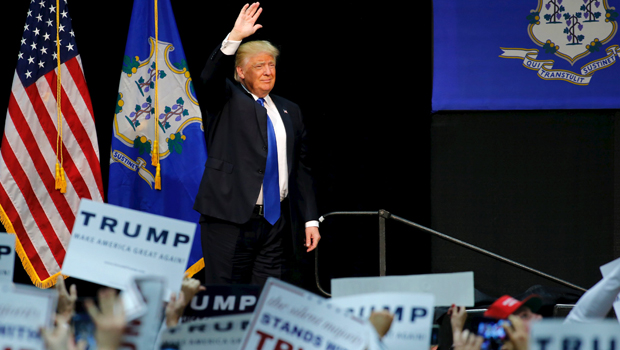 The drama surrounding the Republican presidential contest reached a fever pitch on Sunday, with Donald Trump insinuating he was not interested in pursuing the nomination if there is an open convention - and his rivals announcing that they are teaming up to force just that.

"It's a crooked game," Trump said at an airport hangar in Hagerstown, Maryland. "Folks, it's a rigged system, believe me. It's rigged. ... You probably read, where Cruz is going and he's wining and dining and dinners and hotels and all this stuff. He's bribing people, essentially, to vote. Now, he can't do it in the first ballot because they're locked in to me in the first ballot."

Hours after Trump spoke, Ohio governor John Kasich and Texas Sen. Ted Cruz announced they were teaming to stop the Republican front-runner from getting the 1,237 delegates he needs on the first ballot at the convention to get the nomination.

The Cruz and Kasich campaigns both issued seemingly unprecedented statements late Sunday. The duo had reached an agreement to team up to stop Trump - Cruz would focus his sights on Indiana, which votes on May 3, and shows a competitive race between Cruz and Trump.

Kasich, meanwhile, will pull his resources out of Indiana and reshuffle to Oregon and New Mexico, which the campaigns believe to be more favorable Kasich than Cruz, in an attempt to deny Trump delegates there.

According to the latest CBS News poll, Trump leads Cruz in Indiana by five points.

"To ensure that we nominate a Republican who can unify the Republican Party and win in November, our campaign will focus its time and resources in Indiana and in turn clear the path for Gov. Kasich to compete in Oregon and New Mexico," Cruz's campaign manager Jeff Roe said in a statement, "and we would hope that allies of both campaigns would follow our lead."

The Kasich campaign likewise endorsed a deal. "Due to the fact that the Indiana primary is winner-take-all statewide and by congressional district, keeping Trump from winning a plurality in Indiana is critical to keeping him under 1237 bound delegates before Cleveland," Kasich campaign manager John Weaver said in a statement.

"We are very comfortable with our delegate position in Indiana already, and given the current dynamics of the primary there, we will shift our campaign's resources West and give the Cruz campaign a clear path in Indiana."

Trump was quick to respond:

Then, the Trump campaign issued a statement saying in part, "It is sad that two grown politicians have to collude against one person who has only been a politician for ten months in order to try and stop that person from getting the Republican nomination.

" ... Collusion is often illegal in many other industries and yet these two Washington insiders have had to revert to collusion in order to stay alive. They are mathematically dead and this act only shows, as puppets of donors and special interests, how truly weak they and their campaigns are.

" ... This horrible act of desperation, from two campaigns who have totally failed, makes me even more determined, for the good of the Republican Party and our country, to prevail!"

Trump had spent his Sunday treating Cruz and Kasich as mere hurdles in his path to secure the nomination. In particular, Trump said he found Kasich's remaining in the race baffling.

Kasich, meanwhile, continued his defense of remaining in the race, in spite of having fewer delegates than Rubio, who dropped out more than a month ago.

"We believe ... John Kasich ... is the only candidate who can defeat Secretary Clinton and preserve our GOP majority in the Congress," Weaver said.

And Trump continued contradicting his own campaign officials' closed door message -- that Trump would moderate his tone to make his candidacy more amenable for the general election. He accused Cruz of bribing would-be delegates and said "wonderful Donald" could beat "crooked Hillary."

"I really want to fight Hillary. I really do," Trump said. "I want to fight her. I don't know if she'll be easier or harder but that's the one I want to beat. They actually said - they came with a poll recently. An election between crooked Hillary and wonderful Donald, it'll be the biggest, most incredible vote getting election in the history of our country."

Trump also said that, should he lose to Cruz and Kasich, he would not bow out gracefully.

"Did you ever see when these politicians - they fight like hell for six months saying horrible things," Trump said. "The worst things you can imagine, and then one of them loses. One of them wins. They go - and the one that loses..."

Trump interrupted himself to shift to a mocking voice.

"I just wanna congratulate my opponent. He is a brilliant man. He will be a great governor or president."

Then back to being himself.

"Whatever. I'm not sure you're ever gonna see me there. I don't like to lose. I think I'll go to Turnberry and play golf or do something."