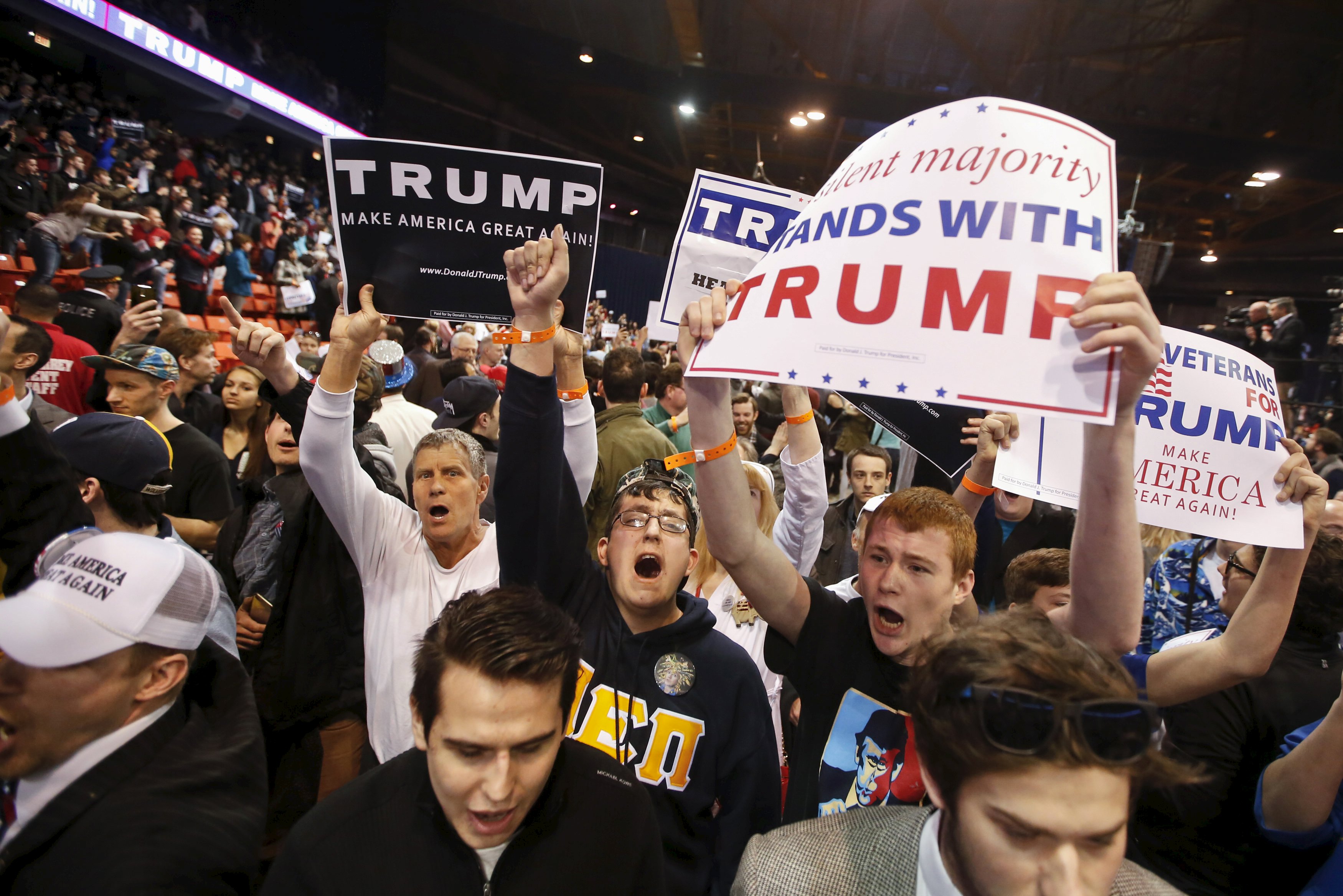 DAYTON, Ohio -- With just days to go before the most important primary contests of the 2016 race, Donald Trump's GOP opponents are denouncing what they describe as his fostering of a toxic political climate. But Trump -- and his supporters -- insist that the blame lies elsewhere.

Backers of Trump who came out to greet him at a private jet at a hangar in Dayton, Ohio on Saturday morning, rejected the idea that the billionaire businessman bears culpability for the violent protests that have plagued his events throughout the country.

The issue gained new prominence after a planned Trump appearance in Chicago Friday evening was cancelled at the last minute by the campaign and quickly devolved into mayhem. Those events prompted widespread condemnation of Trump, who has at times encouraged his supporters to get rough with protesters. "I'd like to punch them in the face," Trump said of a protestor at a rally in Las Vegas.

For his part, the Republican frontrunner is blaming organizations like Moveon.org, as well as Bernie Sanders surrogates, for the violence at some of his rallies, and Trump called on the Vermont senator to condemn the rallies.

"You have to understand they want me to tell my people, please, be nice, be nice - my people are nice!" Trump told a crowd of roughly 3,000. "The people that came there were so nice. And let me tell you the people that were there, that came there, that were invited there, thousands and thousands of people, they caused no problem, they were taunted, they were harassed by these other people."

His supporters here, meanwhile, argued that events such as the violent clashing of protestors and Trump supporters in Chicago Friday night is par for the course when you're on top.

"Conflict is natural," Josh Bradford, a 19-year-old first time voter and Trump enthusiast told CBS News. "Part of being a good leader is being divisive. You want to unify people but at the same time, you know some things you're clearly against and that's going to upset some people."

Nancy Kleindorfer of Columbus, Ohio argued that if anything, last night's display of unrest is yet another indication of "why we need Trump."

"He sees this all happening first hand," Kleindorfer said. "He sees what's going on and he's not afraid to help the country work out their differences so that everyone can get along together and that's what we want."

Kleindorfer vehemently disagreed with the notion that Trump encourages retaliation against those who disrupt his event, while still arguing that that these situations, if anything, help Trump.

"I think it brings more attention to him and makes people wonder why they are attacking someone who is trying to help our country," she told CBS News.

Spinning the narrative to his advantage, Trump rebutted his opponents' attacks by pointing to, in his eyes, their dwindling crowds and waning popularity.

"They don't have any people at their rallies, folks," Trump said of his GOP opponents. "There's nobody there, nobody cares. If they had this hanger they'd have about four people in the corner over there, in that little corner office."

Trump praised law enforcement and the Secret Service for their handling of the Chicago protests and his own decision making for calling off the rally, claiming that "the story is now all over the world" and that "we were given credit for doing the right thing."

Trump's frontrunner's Democratic and Republican rivals, however, say Trump deserves the bulk of the blame for what has transpired at his rallies, citing his incendiary rhetoric.

"People get offended so easily when he makes suggestive comments so that indirectly affects the community," 24 year-old Brianna Innocent of Dayton told CBS News, "He's not saying, 'Go smack the protestors.'"

"I think its ridiculous," Carolyn Alexander, Innocent's grandmother, agreed. "Moveon.org sponsored [the Chicago protest] and the Black Lives Matter. There is no call for it. We have to unite as a nation."