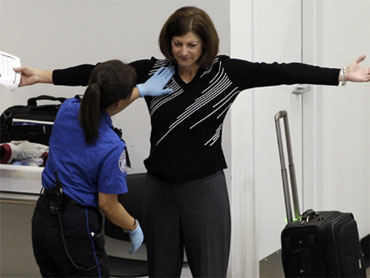 The head of the Transportation Security Administration said Monday that while the new (and highly criticized) airport screening procedures are still being evaluated, and that he is aware of the concerns of the traveling public, there will not be changes made to the TSA's screening of passengers prior to this holiday travel weekend.

His comments this morning followed a statement released by the TSA Sunday which suggested that the door is open to changes. Pistole's statement said security procedures "will be adapted as conditions warrant," to be "as minimally invasive" as possible.

"We're always evaluating and trying to assess what is the best possible way of conducting our security operations to ensure the safety and security of the traveling public," Pistole said this morning on CBS' "The Early Show."

"We know over the weekend that al Qaeda in the Arabian Peninsula issued new information that went into great detail about how they constructed the cargo bombs out of Yemen at the end of last month.

He said TSA is working with security experts, the General Accounting office and the Inspector General's office whose covert testing found screening of passengers had not been thorough enough over the last several years. Pistole said they are looking for "other possible ways of doing screening that would also give some high level of confidence that everybody on every flight has been thoroughly screened."

"But in the meantime, you will continue with the pat-downs that some people call humiliating, violating and demeaning?" asked anchor Maggie Rodriguez.

"Let me say first, very few people actually receive these pat-downs," Pistole replied, saying they are limited to those two trigger an alert when walking through the metal detector or they have opted-out of the new full-body imaging scanner.

Rodriguez recounted the story of a man who said the pat-down he received was so "aggressive" his urine bag spilled. "Why should anyone have to sacrifice dignity for safety?" she asked.

"What it comes down to is that balance that we've been talking about," Pistole said. "Obviously great concern over anybody who has felt like they have not been treated properly or have had something embarrassing like that happen."

But, Pistole said, the bottom line is, "How can we make sure that we don't have an Abdulmutallab, an Underwear Bomber, who opts-out and then [is] not given a thorough pat-down, and have the non-metallic bomb on him that can cause catastrophic harm and kill hundreds of people in the air and perhaps people on the ground?

"That's that balance between the security and privacy. How do we best work that?"

When asked what he would tell those who would participate in National Opt-Out Day, an Internet protest movement calling for air travelers to opt-out of the new body imaging scanners and choose a pat-down on Wednesday (the day before Thanksgiving), Pistole said, "What I would hope that they would consider is the vast majority of people just want to get home for the holidays and spend time with their loved ones."

He said the "vast majority" of people support the use of enhanced screening methods. "Those people just want to get home to spend time with family and loved ones, so I just feel bad for those people who might be delayed because of lines caused by people who want to protest."