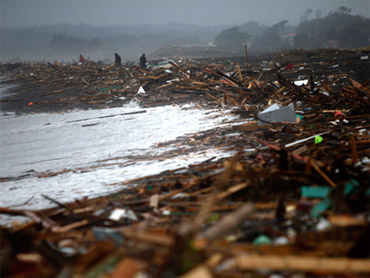 The 40 retirees enjoying summer vacation at a seaside campground nestled under pine trees knew they had to move fast after Chile's powerful earthquake struck.

They didn't make it. The tsunami came in three waves, surging 200 meters into this Pacific Ocean resort town and dragging away the bus they'd piled into, hoping to get to high ground. Most of those inside were tourists, and only five of their bodies had been found by Monday, firefighters and witnesses said.

Pelluhue's horror underscored the destruction wrought by Saturday's pre-dawn 8.8-magnitude quake and the tsunami that ravaged communities along Chile's south-central coast - those closest to the quake's epicenter. Chile's death toll reached 723, and most died in the wine-growing Maule region that includes Pelluhue.

With much of central Chile in ruins, the real push is to speed up relief supplies needed in coastal towns washed out to sea, reports CBS News correspondent Mark Strassmann.

Survivors here found about 20 bodies, and an estimated 300 homes were destroyed. Most residents were aware of the tsunami threat; street signs pointed to the nearest tsunami evacuation route. The ruins of homes, television sets, clothes, dishwaters and dead fish cover the town's black sand beaches.

"We ran through the highest part of town, yelling, 'Get out of your homes!"' said Claudio Escalona, 43, who fled his home near the campground with his wife and daughters, ages 4 and 6. "About 20 minutes later came three waves, two of them huge, about 18 feet each, and a third even bigger. That one went into everything."

"You could hear the screams of children, women, everyone," Escalona said. "There were the screams, and then a tremendous silence."

Destruction is widespread and food scarce all along the coast - in towns like Talca and Cauquenes, Curico and San Javier. In Curanipe, the local church served as a morgue. In Cauquenes, people quickly buried their dead because the funeral home had no electricity.

President Michelle Bachelet said authorities were flying hundreds of tons of food, water and other basics into the region.

After the quake rocked the gritty port town of Talcahuano, Marioli Gatica and her extended family huddled in a circle on the floor of their seaside wooden home, listening to the radio by a lantern's light.

They heard firefighters urging citizens to stay calm and stay inside. They heard nothing about a tsunami - until it slammed into their house with an unearthly roar. Gatica's house exploded with water. The family was swept below the surface, swirling amid loose ship containers and other heavy debris that smashed buildings into oblivion all around them.

"We were sitting there one moment and the next I looked up into the water and saw cables and furniture floating," Gatica said.

Two of the giant containers crushed Gatica's home. A third grounded between the ocean and where she floated, keeping the retreating tsunami from dragging her and other relatives out to sea. Her 11-year-old daughter, Ninoska Elgueta, clung to a tree as the wave retreated.

All the family survived except Gatica's 76-year-old mother, Nery Valdebenito, Gatica said. "I think my mother is trapped beneath" the house.

Firefighters with search dogs examined the ruins of her home. The group leader drew his finger across his neck: No one alive there.

In Concepcion, the biggest city near the epicenter, rescuers drilled through thick concrete to look for survivors trapped inside a toppled 70-unit apartment building. Firefighters had pulled 25 survivors and nine bodies from the structure.

Chile's defense minister has said the navy made a mistake by not immediately activating a tsunami warning. He said port captains who did call warnings in several coastal towns saved hundreds of lives.

In the village of Dichato, teenagers drinking on the beach were the first to shout the warning when they saw a horseshoe-shaped bay empty about an hour after the quake. They ran through the streets, screaming. Police joined them, using megaphones.

The water rose steadily, surging above the second floors of homes and lifting them off their foundations. Cars were stacked three high in the streets. Miles inland along a river valley, cows munched next to marooned boats, refrigerators, sofas and other debris.

"The maritime radio said there wouldn't be a tsunami," said Rogilio Reyes, who was warned off by the teenagers.

Dichato Mayor Eduardo Aguilera said 49 people were missing and 800 homes were destroyed. Some people fled to high ground, only to return too early and get caught by the tsunami, he said.

The World Health Organization said it expected the death toll to rise as communications improve. For survivors, it said access to health services will be a major challenge.

Security remained a concern. Most markets in Concepcion were ransacked by looters and people desperate for food, water, toilet paper, gasoline and other essentials Sunday, prompting authorities to send troops and impose an overnight curfew. The interior ministry extended the city curfew to run from 8 p.m. Monday to noon Tuesday.