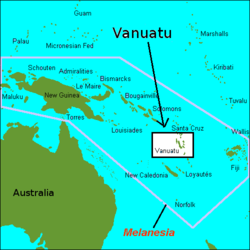 The Pacific Tsunami Warning Center said that sea level readings did not show any signs of an impending tsunami. "If a tsunami was generated, it does not pose a threat to any areas outside the epicentral region," it said in a bulletin sent out this afternoon.

Vanuatu local authorities were checking for information on both the quake and the regional tsunami alert. So far, though, they had no further information, according to a police spokesman in Port Vila on the island of Efate.

According to the Pacific Tsunami Warning Center, there is no immediate Tsunami risk to Hawaii.

In Japan, one of the world's most earthquake-prone countries, police said there were no immediate reports of injury or damage from the quake.

"I would think any damage from a quake this size is unlikely,'' an official with the police, Shimpachi Higashizato, told the Associated Press.

(The Associated Press contributed to this report.)