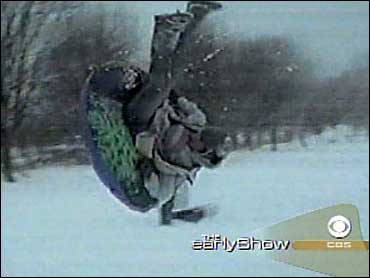 A day of winter fun took a terrifying turn for a Minnesota teenager.

And the incident was

Shaina Rasmussen, 16, was barreling down a hill on an inner-tube when she flipped over and landed on her head and neck.

She injured five vertebrae in her back and some ligaments and had to undergo surgery, but doctors believe she'll make a full recovery.

On The Early Show Monday, Rasmussen told co-anchor Harry Smith she and her friends had picked that hill because it's short and steep, and, "They found a jump (natural ramp) there."

She'd gone over the jump once before and was "completely fine," she says.

But Rasmussen says she didn't know how serious her situation was as it was happening: "Well, I started leaning back a little, and so I knew that was bad, but I didn't even realize it was all wrong until I got to the hospital and they told me."

The accident was videotaped by Rasmussen's friend, Nick Thielman, who told Smith he and another friend "were just bored the day before, and we had found a jump and we got a lot of air and everything, so we thought it would be fun to make a video of it, of people falling and everything."

He also didn't realize what was happening as it did: "Two other people had pretty much landed that exact way, so I figured she just got the wind knocked out of her and she'd be all right in a minute or two."

Rasmussen says, "I could move my legs and everything, so I knew I wasn't paralyzed, but my back hurt so bad, so, yeah. I didn't actually know that anything was broken or anything."

But when she didn't get better, she and her friends knew it was time to call 911.

During the surgery, she has two rods and four screws.

Now, Rasmussen notes, "I've got a brace on and I'll have that on for three months. It goes from my neck to my hips and I sleep with that and everything. Then after that, I can start playing sports, but my back muscles will be tense for a very long time. So I'll still have to go through you know, a lot of treatment and stuff."