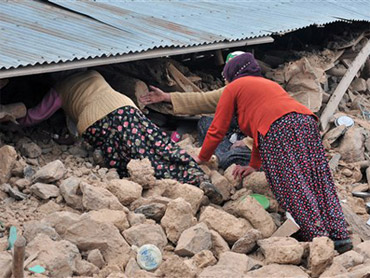 Homes in eastern areas of Turkey prone to earthquakes must be better built to withstand jolts like the magnitude 6 temblor that toppled village houses and killed 51 people this week, the Turkish government acknowledged Tuesday.

Health Minister Recep Akdag said the mud-brick homes typical of Turkey's impoverished villages "topple down in the slightest of jolts, and those caught beneath die from lack of air."

"It has been this way for a hundred years, and we have to beat this," Akdag said.

The earthquake - which hit at 4:32 a.m. Monday (0232 GMT, 9 p.m. EST Sunday) near the remote village of Basyurt in Elazig province - caught many people in their sleep, shaking the area's poorly made buildings into piles of rubble. Worst hit appeared to be the Okcular, where 19 of the village's 900 residents were killed and only a few homes remain standing.

The Kandilli seismology center said there have been more than 100 aftershocks, including one measuring 5.5, since the initial quake, which the U.S. Geological Survey listed as having a magnitude of 5.9.

The region 340 miles east of the capital, Ankara, is near the East Anatolian Fault - one of the two major fault lines that cross Turkey.

The other is the North Anatolian Fault, which runs near Turkey's largest city of Istanbul.


Experts cite a two-thirds chance that a major quake will hit Istanbul within 30 years. Others estimate a 2 percent annual probability of a large temblor in the city that his home to 15 million people, or one-fifth of Turkey's population.

Despite two massive quakes killing some 18,000 people in northwest Turkey in 1999, seismologists and civil engineers warn that not enough has been done to protect Istanbul in the event of another strong temblor in the region.

Istanbul itself planned to assess the city's buildings to identify those needing reinforcement or demolition, but experts say the follow-up work has lagged. Part of the problem, some say, is a lack of oversight in construction.

"It is not small earthquakes that kill people, it is unlicensed constructors and disorderly construction that kill," the Ankara-based Tum civil engineers federation said in a statement.

Prime Minister Recep Tayyip Erdogan blamed many of the 51 deaths from Monday's quake on the shoddy mud-brick buildings typical of the eastern region.

He pledged the government housing agency would build quake-proof homes in the area.

"We must ensure building resilience," Labor Minister Faruk Celik said. "We are living on the earthquake zone, and we don't know what can happen to us from one day to the next."

Authorities urged the people in Elazig province not to enter damaged homes that could collapse from aftershocks.

Most of the 51 people killed in Monday's quake were immediately buried according to Muslim traditions, but a few funerals were put off until Tuesday.

Fifteen of the deaths occurred in Yukari Demirci village, four in Kayalik village, another four in Gocmezler village, and 10 died in hospital in Kovancilar town, officials said.

Survivors crowded around bonfires to keep warm overnight while sheltering in makeshift tents made of plastic sheeting provided by the Turkish Red Crescent. The government said it also sent prefabricated homes and mobile kitchens.