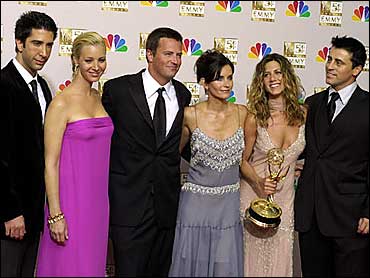 This June, Fox presents rappers Method Man and Redman as stars of a new sitcom about adjusting to life in a stuffy gated community.

It should. Will Smith walked the same road in the early 1990s on "The Fresh Prince of Bel-Air." Go back even further, and you'll find the same culture shock themes in "The Beverly Hillbillies."

With the "Friends" finale on May 6, "Frasier" bowing out a week later, "Sex and the City" already gone and "Everybody Loves Raymond" on its last legs, TV comedy is at a crossroads.

Depending on how you look at it, the sitcom is either an exhausted format in need of new ideas or a time-tested but slumping genre just waiting for new personalities.

"It's clearly a genre in desperate need of reinvention," said Doug Herzog, Comedy Central president. "I say that as much as a viewer as a television executive."

The success of "Friends," "Frasier" and the rest has masked how deep TV comedy's problems really are. So far this season, only five comedies are among Nielsen Media Research's list of top 25 shows, compared to nine dramas and nine reality shows ("60 Minutes" and sports fill out the list).

One is "Friends." Another is "Raymond," which is most likely headed into its last season. "Will & Grace," in its sixth season, is showing its age. "Coupling" lasted only a few weeks, this season's punch line for bad television.

That leaves CBS' "Two and a Half Men," hardly innovative and unproven without its "Raymond" lead-in.

ABC has tried to rebuild behind comedies the past few years. But "8 Simple Rules for Dating My Teen-Aged Daughter" was derailed by John Ritter's death, and none of the others has reached a wide audience. With ABC just firing its management team, the strategy may be gone, too.

"People just don't care about sitcoms," said Stephen Fishler, a producer with Metropolis Entertainment who is experimenting with hybrids of reality and comedy. "Nobody is standing around the water cooler saying, `did you see `According to Jim' last night?"'

Those who believe comedy is simply in a slump point to all of the "comedy is dead" articles that appeared two decades ago just before "Cosby" ushered in a golden period with "Cheers" and "Seinfeld."

"The comedy resurgence is one good sitcom away," said Dick Wolf, executive producer of the "Law & Order" series. "I don't think anyone is coming out and saying, `My God, nobody is watching these great new sitcoms."'

Although Fox's "Arrested Development" has critical acclaim and dedicated fans, not many people believe the next great comedy is already on the air, waiting to be discovered.

Too many new sitcoms over the past few years are stylistically no different than those produced 40 years ago, Herzog said.

"They're just old-fashioned," he said. "They're all shot the same way. All have the same look, feel and tone. I feel as a viewer that they're horribly predictable. There's a whole generation that they don't speak to at all."

MTV, HBO and Comedy Central have changed the way people watch television and changed the type of humor that people enjoy, he said.

Sitcoms are a popular style for TV executives because when done right, they're a virtual gold mine. Shows like "Seinfeld" and "Friends" can live on in perpetuity in syndication, producing revenue long after the actors have moved on.

"I just feel like we've been bludgeoned with too many pale imitations," said Todd Holland, creator of Fox's short-lived series "Wonderfalls."

NBC has been particularly aggressive developing comedies this spring, both because of its lack of recent success and its high-profile losses. The efforts range from the predictable -- "Friends" spinoff "Joey" -- to more adventurous fare like "Father of the Pride," with computer-generated animation.

CBS has a pilot with "Seinfeld" actor Jason Alexander portraying a Washington Post sportswriter. Jeff Goldblum, Jessica Simpson and Rob Reiner are other big names attached to projects in development.

Fox has an agreement with a comic troupe in Los Angeles, the Naked Angels Theater Group, as a workshop to try out new ideas, said Craig Erwich, the network's executive vice president for programming.

"We're definitely trying to take a lot of shots because we don't know which way it's going," Erwich said.

Other creators are also trying to stretch the boundaries of the form. HBO's "Curb Your Enthusiasm," considered one of the funniest shows on the air, uses loose story structures that give actors room to improvise.

NBC is making an American version of BBC's "The Office," which puts actors in settings that viewers can recognize as real life.

Fishler believes these type of scripted reality shows represent the future. He's making two of them: "Life After Skippy," which focuses on a has-been child actor, and another set in a make-believe local TV newsroom.

He provides the setting and the situations, then sets the actors free.

"It's a very subtle format and it's hard to describe to someone why it's appealing until they actually see it," he said. "It's a matter of creating funny, uncomfortable, subtle moments."

Some of what is considered "reality" today, like "My Big Fat Obnoxious Fiance," is really comedy, Erwich said. "The Simple Life" is as much a fish-out-of-water comedy as "The Beverly Hillbillies," only with wealthy people sent to live with the commoners instead of the other way around.

Others believe in being counterintuitive.

Some of the series that rely on production gimmicks, like "Scrubs," lose luster quickly, said Robert Thompson, head of the Center for the Study of Popular Television at Syracuse University. And an "Arrested Development" requires viewers to pay closer attention than many want when watching a comedy, he said.

"You could enjoy an episode of `Friends' if you're half-dead," Thompson said. "I would defy anyone -- even if they've never seen the show before -- to watch three minutes of `Friends' and remain confused."

The next great comedy will likely be very traditional in feel and form, he said.

One of television's top creators, "Survivor" and "The Apprentice" producer Mark Burnett, said people shouldn't be intimidated by the sorry state of comedy.

CBSNews.com, Comedy Central, MTV and CBS are owned by Viacom.
By David Bauder