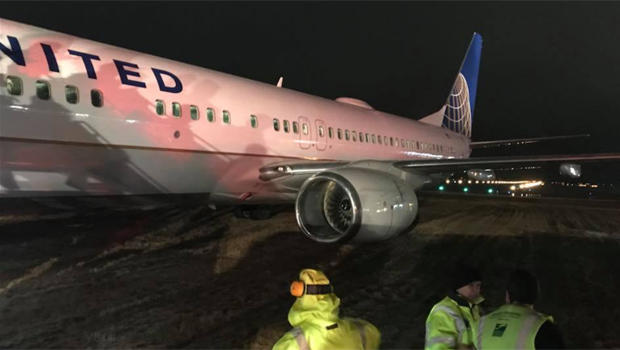 A United Airlines flight bound from Houston to Minneapolis made two unscheduled landings and ran off the runway after the second one early Friday, the carrier says. United says Flight 878 was first sent to Madison, Wisconsin, due to severe weather in Minneapolis.

The plane took off from Madison, but severe weather prompted another diversion, this time to Green Bay, where it skidded off the runway, United says, adding that no one was hurt.

"We are in contact with all customers and are providing alternate transportation options including flights and buses," the airline said in a statement. "Customers were also provided meals and hotel accommodations."

Passenger Tom DeSimio tells CBS News there were roughly 160 passengers on board.

When the plane landed, the pilot hit the brakes in full reverse, and it got really bumpy. That, says DeSimio, is when he realized something had gone awry.

The captain did a good job of communicating with people as they got off and was very apologetic, DeSimio adds.