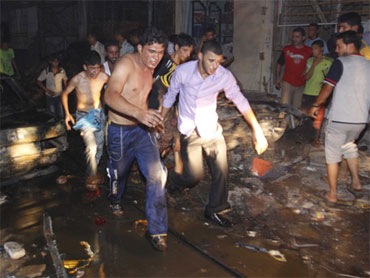 Explosions killed at least 20 people and wounded as many as 100 Saturday night at a downtown market in Iraq's second-largest city, a senior official said, coming at the end of a violent day that also saw the slaying of seven policemen around the country.

It was the latest spate of attacks to come as all but 50,000 U.S. military troops head home by the end of the month.

Al-Sulayti said at least 20 were killed by the blasts that came within minutes of each other at central Basra's al-Ashaar market. He said an estimated 100 were injured.

But as is common in the immediate chaos after Iraq explosions, the death toll varied among officials. A senior commander in Basra's security operations center said 43 people were killed and more than 200 wounded. He spoke on condition of anonymity because he was not authorized to talk to the media.

Another report had as many as 60 people dead.

Officials also differed over the cause of the blasts.

Two police officials said a roadside bomb and a car packed with explosives caused the explosions. Both spoke on condition of anonymity. But Basra Police Chief Adil Daham said the explosions were caused by a malfunctioning power generator.

Television footage showed bloodied bodies being loaded into ambulances amid hysterical bystanders, some of whom blamed Iraq's stalled government for the bloodshed.

"Why do they not agree, while the victims are falling down?" shouted one unidentified man. "The politicians are after posts and chairs. Reach an agreement, you traitors."

Five months after parliamentary elections that failed to produce a clear winner, Iraq's leaders have yet to form a new government — sparking angst and anger across the country. In Basra, where power outages have stymied air conditioning units in the searing summer temperatures, citizens have held demonstrations to blame politicians for the lack of public services.

In the most dramatic of the attacks Saturday on Iraqi security troops, gunmen killed five policemen in an overnight shootout that lasted until dawn at a suspected bomb workshop in western Baghdad, security officials said.

Tipped off by a carjacking, police trailed the suspects to a house in the mostly Sunni neighborhood of Saidiya, where they came under fire from an unknown number of gunmen.

The shooting lasted until daybreak, when the gunmen slipped away through a rear entrance, according to two Baghdad police officers and an Interior Ministry official. Two of the attackers were nabbed later Saturday while hiding in an orchard in a suburb north of Baghdad, the officials said.

When police searched the house at the scene of the shootout, they found one gunman dead with a pistol at his side.

Seven policemen and six residents, including two women and a 14-year boy, were also wounded in the shootout, the officials said. An emergency room worker at Yarmouk Hospital confirmed the casualties.

Also inside the house, police said they found a cache of bombs, chemicals and other devices to make explosives.

A minibus packed with explosives was also found in the garage, officials said, adding that there was a trail of fresh blood in the house from at least one of the gunmen.

Violence has dipped dramatically in Iraq, but shootouts and bombings are still common.

According to police and health officials across Iraq, other attacks Saturday included:

• A policeman was shot dead at a checkpoint and two others were wounded outside the city of Fallujah, 40 miles (65 kilometers) west of Baghdad.

• Bombs were planted outside the homes of three policemen and a member of the government-allied Awakening Council in Karma, near Fallujah. Some 15 people were wounded, but there were no fatalities.

• A suicide bomber killed one policeman and wounded three others during a security foot patrol in the northern city of Mosul. Two bystanders also were injured.