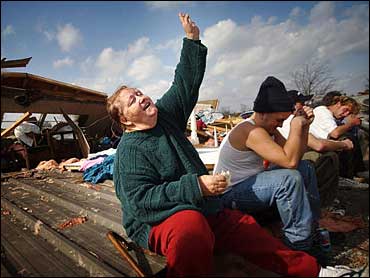 Emergency crews searched for survivors Monday amid the wreckage from a series of pulverizing tornadoes that barreled through Alabama, Tennessee and Ohio, killing at least 33 people and injuring more than 100.

A wide band of storms stretched from Louisiana to Ohio, with Tennessee and Alabama the hardest hit. The death toll included 16 in Tennessee, 10 in Alabama and five in Ohio, while 45 people were unaccounted for in the rural town of Mossy Grove, officials said. Pennsylvania and Mississippi are reporting one death each.

A tornado cut a swath five to six miles long just before 9 p.m. Sunday, killing seven people in the town about 40 miles west of Knoxville. Emergency crews relied on ham radio operators for communication since phone lines were knocked out by the storm.

Authorities were kept away from assessing much of the damage because toppled trees and power lines were blocking roadways, and they feared the death toll would rise as daybreak revealed the extent of the devastation.

Carbon Hill, Ala., was in a similar situation as a nighttime swarm of tornadoes and powerful thunderstorms belted the area and sent giant hardwood trees crashing down on small houses and mobile homes.

"I reckon about a third of the town is gone," said Terry Murray, part of a tree crew surveying the extent of the damage.

The tornadoes flattened dozens of homes throughout the region and left tens of thousands without power. Winds hit an estimated 140 mph in Tennessee and the storms carried torrential rain and golf-ball-sized hail.

Unseasonably high temperatures Sunday in the 80s, followed by a cold front, made conditions ripe for tornadoes, which are not unusual this time of year, said Gene Rench, a National Weather Service meteorologist in Memphis.

The injured included at least 55 people in Tennessee, 50 in Alabama and in 21 Ohio, authorities said.

Several people died as they became trapped in cars and homes, while others frantically tried to escape the churning storms.

"I heard a roar. I saw a black wall," said Jon Cross, who was packing his cruiser to go to work as a State Highway Patrol trooper in Ohio when he saw the storm. "I could see everything spinning. It was coming right at me."

The storms cut a 100-mile swath through northwest Ohio farmland, doing serious damage to the town of Van Wert. Gov. Bob Taft declared a state of emergency Sunday night in Van Wert and Ottawa counties, but the storms caused problems around the state.

"It pulled everything off, set it down, then threw it in a field," said Brian Farris of Van Wert, who watched a tornado touch down and level a house. "It was on the ground at least a mile."

In Alabama, nine people died in Walker County as a line of thunderstorms packing high winds and spinning off tornadoes rolled through the northern part of the state, said Walker County Deputy Coroner Bob Green.

Green was at the scene where the bodies of two women were found: "They were laying down off the side (of a road)," he said. "It was bad, Carbon Hill had a bad time."

In Tennessee, the tornadoes came in two waves. Late Saturday and early Sunday, twisters skipped across western and middle Tennessee, killing three people. On Sunday night another line of storms crossed the state — this time south and east of Nashville.

Two people, including a 10-year-old boy, were killed and 15 people were injured in Coffee County when two mobile home parks, three houses and a church were damaged near Manchester on Sunday night, Sheriff Steve Graves said.

About an hour later, a tornado ripped through Mossy Grove, damaging at least a dozen houses, said Steven Hamby, director of the Morgan County emergency management center. The dead include a 4-month-old child. Four people were killed in neighboring Cumberland County, officials said.

"Apparently, it just dug a path," he said.

Hamby said since phone lines were down, some of the people reported missing might be OK, but have no way of letting others know that.

The Tennessee forecast for Monday called for party sunny skies and temperatures in the high 50s. "The rain is over for a while," Rench said.