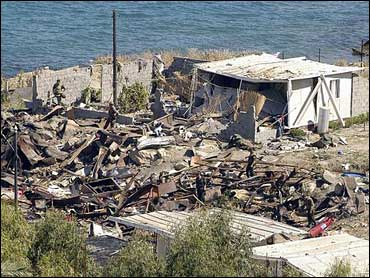 A car bombing killed 28 coast guard officers in Algeria on Saturday, just days after a blast ripped through a crowd waiting for the president. Al Qaeda's North African affiliate claimed responsibility for both attacks.

Al Qaeda in Islamic North Africa has carried out a spate of recent bombings that have shattered the Algerian government's efforts - successful until recently - to restore calm after a 15-year Islamist insurgency.

"We swear to God to continue (to) sacrifice our lives until you stop supporting the crusaders in their war, apply the Islamic tenet and stop your war against God's religion," the group said in a statement posted on an Islamic Web site.

The government has responded by intensifying military crackdowns on Islamic militants hiding out in remote scrubland. Interior Minister Noureddine Yazid Zerhouni warned terrorists Friday that they have "one choice: turn themselves in, or die."

In Saturday's blast, explosives planted in a van ripped through barracks in the northern coastal town of Dellys, about 30 miles from the capital, Algiers. The bombing appeared timed to kill as many officers as possible, when they were grouped together to raise the flag.

It was not immediately clear whether the bomber was killed in the blast or escaped.

The 28 victims were all coast guard officials, hospital authorities said, speaking on condition of anonymity because they were not authorized to speak to the media. About 20 others were injured.

It was Algeria's deadliest attack since April, when triple suicide bombings against the prime minister's office and a police station killed 32.

Jean-Maurice Ripert, France's ambassador to the U.N. and president of the Security Council, condemned the bombing in a statement in New York, calling it a "heinous terrorist attack."

A bombing Thursday killed at least 22 in a crowd of people in eastern Algeria who were waiting to see visiting President Abdelaziz Bouteflika, who has devoted his eight years in office to ending violence by insurgents. His government is also a staunch U.S. ally in the war against terror.

There was widespread speculation that Bouteflika was the intended target in the Thursday attack, although officials have not commented on the likelihood.

Algeria's insurgency broke out in 1992 after the army canceled elections that a now-banned Islamic party was poised to win. Up to 200,000 people were killed in the ensuing violence.

Widespread killings were on the wane until this year, when the Algerian militant group Salafist Group for Call and Combat, or GSPC, officially linked up with al Qaeda, taking the name al Qaeda in Islamic North Africa.

The group claimed responsibility for the triple suicide attacks in April and another blast in July, when a suicide bomber blew up a truck inside a military encampment, killing 10 soldiers. The militants have also killed foreigners in smaller-scale attacks.

Over the years, the government has offered amnesty to reformed militants while waging tough military operations against those who refused them - a strategy Bouteflika pledges will reconcile the nation.

Those tactics dramatically reduced the number of fighters, and the GSPC may have joined up with al Qaeda partly as a way to survive and attract a new generation of fighters.

"To recruit, they can say, we are in international jihad, we need to help our brothers in Iraq, and Afghanistan, not just fight in Algeria," said Louis Caprioli, the former assistant director of France's DST counterintelligence agency, who now works for risk-management company Geos.

Despite the wave of recent attacks, Algerian officials have repeatedly insisted that al Qaeda in Islamic North Africa is riven with internal disputes and ready to implode. Prime Minister Abdelaziz Belkhadem said Saturday that terrorism was in "decline" in Algeria, and that militants "have never succeeded, in 17 years, in their desperate need to strike at the country's stability."