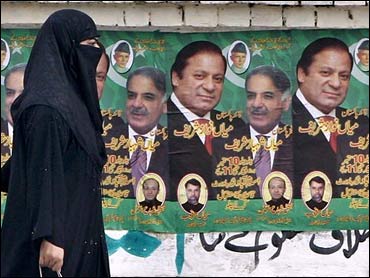 Authorities in Pakistan say at least 25 people were killed and at least 65 others were injured Tuesday in two early morning suicide bombings in Rawalpindi, about seven miles southwest of Islamabad.

The first bomb exploded on a 72-seater bus which a police spokesman says belonged to the Pakistani army.

As the ambulances were transporting victims from the bus blast, a second bomb went off in one of Rawalpindi's commercial districts.

"It was a motorcycle bomb," said Mohammed Afzal, a local police official. "It exploded with a big bang and killed at least five people."

"These blasts could well be linked to the situation in the border areas. We have seen other attacks by militants this year in retaliation for what the government is doing there," said a Pakistan security official who spoke to CBS News on the condition of anonymity.

Suicide attacks have become increasingly frequent in Pakistan this year.

In reaction to Tuesday's attacks, the Pakistani government has put Islamabad - the capital - and Rawalpindi - where the military's headquarters are located - on high alert.

A senior Pakistani intelligence official told CBS News the bombings could mark the beginning of another vicious campaign of the kind in July when about 200 people were killed in suicide and armed attacks by Islamic militants, mostly targeting locations in the northern parts of the country close to the Afghan border.

"This is an extremely dangerous moment," said the official, speaking on the condition of anonymity and expressing concern that there might be more attacks in the works.

The official also said there have been numerous security alerts in the past two months, warning that a number of Islamic militant suicide bombers had fanned across the country and were waiting to strike.

Authorities say the first bomb ripped through a bus carrying employees from the armed forces; the second - a device tied to a motorcycle - went off in a commercial district near Pakistan's capital Tuesday.

Pakistan is a key ally of the U.S. in its war on terror. It has witnessed scores of bomb attacks and other acts of terrorism since the Sept. 11, 2001, attacks in the U.S. Officials have blamed pro-Taliban and al-Qaeda elements for most of the attacks in Pakistan.

A senior government official says Musharraf plans Tuesday to try to seal a deal with exiled former Premier Benazir Bhutto that could keep Musharraf in power.

A spokesman for Bhutto, however, says no such meeting has been arranged.

Musharraf and Bhutto have been discussing a pact that would shore up the U.S.-allied president's troubled re-election bid while allowing the former prime minister to return to Pakistan and contest parliamentary elections.

Bhutto has so far failed to win a public commitment from Musharraf that he would quit as army chief or give up the presidential power to fire the government.

Musharraf's supporters have balked at Bhutto's demand that she be allowed to return and run for a third term as prime minister.

A senior Pakistani government official says with Musharraf up for re-election between Sept. 15 and Oct. 15, negotiations between the general and Bhutto are not likely to succeed.

"I don't think the hard-liners of both sides will allow" agreement, said Railways Minister Sheikh Rashid Ahmed, in an interview on Dawn News television.

Musharraf has dominated Pakistani politics since seizing power in a bloodless coup in 1999.

His authority has waned since a botched attempt in March to fire the country's top judge triggered protests and widespread calls for an end to military rule.

Washington continues to praise Musharraf, but has also been pushing for a broader-based government that might be able to strengthen Pakistan's efforts against the Taliban and al Qaeda.

A pact with Bhutto would include amendments to the constitution to pre-empt challenges to Musharraf's eligibility before the Supreme Court.

Leaders of the ruling Pakistan Muslim League-Q party, whose influence would be eroded by any agreement with Bhutto, have said she is demanding too much in return.

Both Bhutto and Nawaz Sharif, another exiled former premier, have vowed to return, with or without the government's blessing, and contest general elections due by January 2008.

Sharif, who was jailed and later sent to Saudi Arabia after Musharraf toppled his government, has announced that he will return on Sept. 10, despite threats that he could be re-arrested.

Bhutto, who fled in 1999 while facing corruption allegations, has said she will return in the coming weeks, but has set no date.