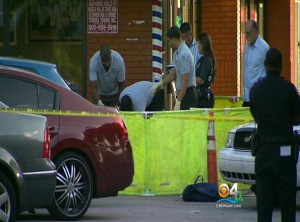 MIAMI -- An argument over a parking space reportedly led to a deadly shooting in Miami on Sunday outside a barber's shop, reports CBS Miami.

During an argument over the parking spot, witnesses said a security guard, whose name has not been released, shot the owner of the barber shop, 37-year old Gerson Mieses.

Miami Police Officer Frederica Burden said when one of their officers arrived on the scene, he tried to separate the men.

Both the guard and Mieses died.

Burden said the officer who shot the guard is close to retirement and has nearly 20 years of experience.

The security guard’s first name was Ruben, according to his cousin Joshua Rodero, who showed up at the barber shop Sunday night.

Friends of Mieses said the two men had been at odds for months. They say the security guard had been handing out fliers for a rival barbershop that recently opened across the street. They added that the two would often fight about over a parking spot and claim the guard had threatened Mieses days earlier.

“Before he died he told me that the dude said he was gonna kill him,” said Rashad Williams.

Neighbors and friends of Mieses stopped by the shop after hearing word of his death.

“It was terrible. There was no need for something to go that far,” said Jean Robinson. “It’s sad. It really is.”

Robinson also said she was knew the security guard and called him a “nice guy.”

“I feel terrible and said,” said Laura Valverde, who also said she knew the security guard. “It’s not right to have a shooting over a parking space.”