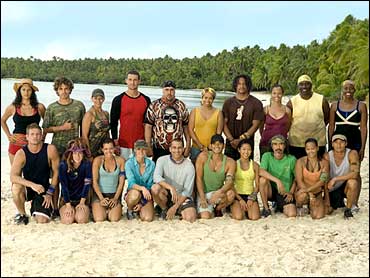 The 13th season of "Survivor" may prove to be the most interesting and controversial yet. "Survivor: Cook Islands" premieres Thursday night on CBS. The show's twist has already been revealed — the teams are divided based on race, sparking a great deal of criticism.

Two journalists got the chance to see how the contestants are dealing with the situation. Dalton Ross of Entertainment Weekly and Alexis Chiu of People magazine were there the night the 20 contestants, divided into four teams of whites, blacks, Asians and Hispanics, were first told about how they were being split.

"It's interesting. I was traveling with the contestants and did the math," Ross told The Early Show's Harry Smith. "I looked and saw five African-Americans; I thought that's unusual, usually you have two. I saw five Asian-Americans. That's double the amount ever on survivor, so I said to a colleague, 'I think they are
going to do this.' She said, 'You are crazy.' Time flies, I guess."

"It was clear something was going on. Much more diversity and it wasn't until they announced it that I made the leap and realized, but with Mark Burnett — you can't put anything past him — so it wasn't surprising," Chiu said.

The contestants will go through the usual "Survivor" process of making and breaking alliances within the new society they create. All the while they vote one member off "the island" and the winner wins $1 million.

The contestants were given the news individually the night before the game began. Chiu said that they did not have much time to process the information, and right away they began working on their shelters and strategies. Chiu said she thinks the race theme will make the show more interesting.

"Anything they can do to change it up. As you might be able to tell, I am half Asian, so I might have a different perspective," she said. "I think it's a great idea."

Ross, who is white, said "my gut is they are playing with fire. It's very risky."

"I think they felt like they were ready to take that risk," he said. "But, you know, you try and control it as much as they could in casting. Mark Burnett said we are not going to put negative people in here. But once the cameras start rolling, there's only so much control you can have over that, so there's a lot of crossed fingers going on."

A concern has been that people watching at home will cheer for the contestants of their own race and divide the audience, but Chiu said that people will always pick their favorites based on different characteristics, be them race or physical attractiveness. She also said there is diversity within the tribes.

"A Korean and Japanese and Vietnamese are going to have as much difference as a black and white person," she said.

Millions of households could get $50 monthly internet subsidy

The agency approved a $3.2 billion program to help low-income families and people who lost jobs in the last year.