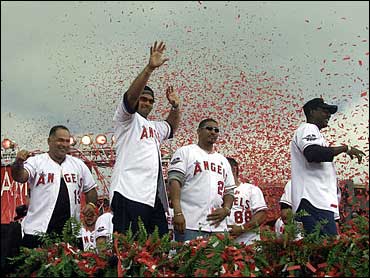 A second parade followed, beginning at Arrowhead Pond, home of the NHL's Mighty Ducks, and ending at the Angels' Edison Field, where officials estimated 100,000 people had gathered. Players, coaches and their families rode a dozen fire trucks and other emergency vehicles to the stadium.

"I waited 10 years for something like this," veteran Angels slugger Tim Salmon told the screaming crowd. "But I know you guys have been waiting a lot longer. This is yours."

Added Angels relief pitcher Troy Percival: "We want to do this every year."

Kelly Baas, 18, arrived for the parade wearing angel wings and a halo.

"Everyone is making fun of me, but I don't care," she said. "I missed school. I missed work. I missed everything to be here."

Mike Goetz, 44, arrived at Edison Field at 5:30 a.m. with signs that read, "Thanks for the dream, Walt and Gene" and "And after the seventh game, we party."

The Angels, longshots to win the World Series at the beginning of the season, beat the San Francisco Giants on Sunday night to win the first championship in the team's 42-year history.

The parade and rally at Edison Field were free, but fans had to pay admission to attend events in Disneyland and Disney's California Adventure park. The Walt Disney Co., which bought the Angels after Autry died in 1998, was criticized for charging fans for the events at the two parks.

John McClintock, a spokesman for the Disneyland Resort, said there could have been severe crowding and other logistical problems if the parks had been opened free.