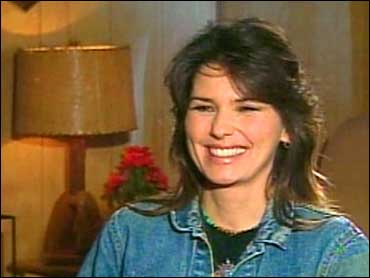 The artist, who will perform at the Country Music Awards Tuesday night, told The Early Show co-anchor Hannah Storm that she likes to keep her home life separate from her work.

"When I'm not on the stage, I'm at kitchen in home and cooking. When I'm not writing songs, I'm writing recipes. There are two sides to my life that are both very important. I couldn't do without either. And I love the contrast that it brings to my life and the change. But I never live in both at the same time."

She says Eja still doesn't seem to understand what his mommy does for a living. "He knows I go to concerts. When I come back, he'll say, 'How was your concert, Mommy?' instead of, 'How was your day?'"

Twain's new CD, a compilation of hits, is being released Tuesday to coincide with the music awards, as is a new CD by country star Toby Keith.

Storm also caught up with Keith, who is on tap to perform Tuesday night, too.

While Twain has four CMA awards on her mantle, Keith has only one. Twain isn't nominated this year, but Keith is, in six categories. He hopes to improve on his track record: He has one award (2001 Male Vocalist of the Year) out of 24 nominations. This year, he's up for Entertainer of the Year, Male Vocalist, Album of the Year, Single, Video and Musical Event.

Last year, his prediction to Storm that he'd be shut out despite seven nominations came true.

What's his take on this year? "We're rewarded enough without having to get the awards, too," he said. "I have a great job. It's never affected me one way or the other. I've won 'em, I've been shut out. This happens to be an awards show where I strike out a lot.

Brooks & Dunn host the Country Music Awards for the first time Tuesday night. The 38th annual rendition will be broadcast live on CBS from the Grand Ole Opry in Nashville at 8 pm. ET/PT.

Tim McGraw is slated to kick off the festivities by performing "How Bad Do You Want It" from his new album "Live Like You Were Dying."

In addition, educator and former music industry executive Jim Foglesong will join actor and country music icon Kris Kristofferson as the 91st and 92nd members inducted into the Country Music Hall of Fame.

One of music's most successful female artists ever,Twain will make a special appearance on the CMA extravaganza, performing the latest single off her new greatest hits CD. The CD consists of 17 classics and three band new songs.

The tune she'll be performing at the CMAs is a flirty, fun duet with country newcomer Billy Currington, called "Party for Two."

She admitted she'll be nervous, though she said she's not sure why she still gets the jitters this point in her career.