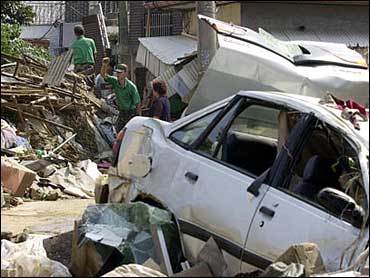 The government said Tuesday that nearly 200 people were killed or missing in a powerful typhoon that pounded South Korea over the weekend. The toll was expected to rise.

The government's anti-disaster center said that 113 people were confirmed killed and 71 others missing after Typhoon Rusa swept through eastern and southern parts of South Korea.

Center officials said they were checking reports by relatives and villagers that 14 more people were missing in floods and landslides.

Park Chung-ho, a center official, said the death toll could rise as communications with remote, isolated areas were restored. He said many of the missing were feared dead.

Rusa, the Malaysian word for deer, was the most powerful typhoon to hit South Korea since Sarah in 1959, which left over 840 people dead or missing.

Rusa destroyed many sections of railways and roads, wiped out bridges, knocked out electricity and submerged thousands of homes. Property damage was tentatively put at $750 million.

One of the hardest hit was Gangwon province on the country's east coast where 128 people were killed or missing. Its seat, Gangneung, was swamped by waist-high floods after getting rainfall of 36 inches in less than two days.

"Nothing is more miserable than this. I would rather die," said Kim Bun-hee, a 61-year-old housewife, standing in a long line to get a ration of drinking water brought by firetrucks. Kim said the basement of her home was still flooded.

Power outages that had crippled the city of 220,000 for two days were eased as officials began repairing damaged power lines. But residents still had difficulty getting drinking water.

Hundreds of graves were washed away in a landslide that destroyed a large part of a public cemetery outside Gangneung. Television clips showed people shoveling the leveled ground to try to locate the missing tombs of their loved ones.

Thousands of soldiers were helping residents clear mounds of broken furniture and damaged household goods that filled streets. Many schools in the city and nearby areas were temporarily closed.

The government ordered the military and police to help in the rehabilitation work. Helicopters were used to drop relief goods in isolated villages in the country's southern areas.

It was unclear how much the latest flood would affect the North's chronic food shortage. The communist country has been relying on outside aid since 1995 to help feed its 22 million people.

"The number of dead and missing is on the rise," Kim told Reuters television. "The damage to property is expected to be the largest in history."

"This is a hell on earth," said Kim Jung-ok, a 54-year-old housewife in Gangneung, wiping tears from her face as she shoveled mud from the living room of her home.

Witnesses said coastal roads and rail lines had been washed away, houses flooded and cars and trucks completely buried as roads buckled beneath deadly landslides.

More than 17,000 houses and buildings in low-lying areas were submerged, forcing 27,474 residents to take shelter at public buildings and schools.

"There are cows from flooded farms standing in the road," Jeong said.

Air, land and sea transport was largely back to normal on Monday after all domestic flights and some regional services were cancelled on Saturday.

The country's two airlines, Korean Air and Asiana Airlines, said they had lost a combined 5.5 billion won in revenue.

Rusa was the most destructive typhoon to hit the Korean peninsula since Sarah in 1959, which killed more than 800 people.

South Korean President Kim Dae-jung convened an emergency cabinet meeting on Sunday and urged quick repairs to damaged facilities, including those built for the Asian Games which are to open in the southern port city of Pusan on September 29.