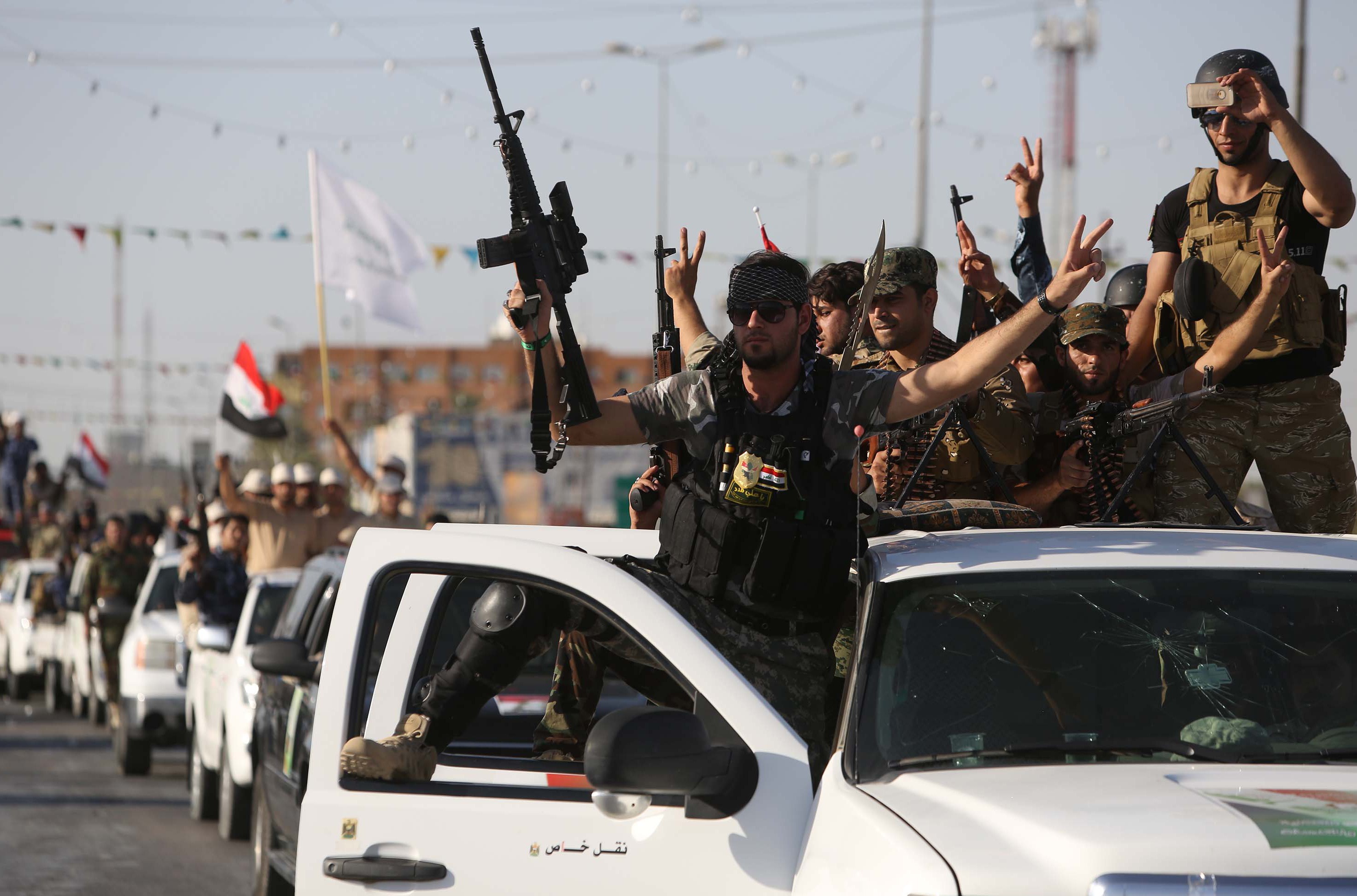 The Unites States is flying armed drones over Baghdad, a Pentagon official has confirmed to CBS News national security correspondent David Martin. The flights, which are not round the clock, are for the protection of the embassy and are not the precursor to air strikes.

Pentagon spokesman Rear Admiral John Kirby said Friday that armed aircraft in Iraq are "primarily for force protection now that we have introduced some military advisers whose objective will be to operate outside the confines of the embassy."

The Pentagon said Thursday that four teams of Army special forces had arrived in Baghdad, bringing the number of American troops there to 90 out of the 300 promised by Obama. The Americans will advise and assist Iraqi counterterrorism forces.

Meanwhile, Iraq's top Shiite cleric on Friday called on political blocs to agree on the next prime minister before the newly elected parliament sits next week, stepping up pressure on political leaders to set aside their differences and form an inclusive government in the face of Sunni militants who have seized large swaths of territory.

The call by the Iranian-born Grand Ayatollah Ali al-Sistani came as the incumbent, Nouri al-Maliki, was fighting to keep his job, with his erstwhile Shiite allies and even key patron Iran exploring alternatives in the face of Iraq's worst crisis since U.S. troops withdrew at the end of 2011.

Al-Sistani also wants the political blocs to agree on the next parliament speaker and president by the time the new legislature meets on Tuesday, a cleric who represents him told worshippers in a Friday sermon in the holy city of Karbala.

Human Rights Watch meanwhile said the extremist Islamic State of Iraq and Syria (ISIS) executed at least 160 captive soldiers earlier this month. The rights group based its findings on satellite imagery and grisly photos released by the militants, corroborating earlier accounts of the alleged massacre and saying the actual toll could be far higher.

On the military front, a senior Iraqi army official told The Associated Press that Iraqi commandos aboard four helicopters landed at a soccer pitch inside a university campus in the insurgent-held city of Tikrit late Thursday and clashed with militants of the Islamic State of Iraq and the Levant for several hours.

One of the helicopters developed mechanical problems after takeoff from Tikrit, 80 miles north of Baghdad, but landed safely in the provincial military headquarters. The official had no word on casualties and declined to specify the mission's objectives. He spoke on condition of anonymity because he was not authorized to brief the media.

The official also said 200 troops have arrived at a key refinery north of Baghdad under attack by militants for more than a week. The reinforcing troops join a 100-strong contingent that has been defending the Beiji refinery, Iraq's largest and the source of about a quarter of the country's oil product needs, including fuel for power stations.

State-run television on Friday aired footage purporting to show troops disembarking from helicopters at Beiji, with some carrying boxes of supplies. Dense black smoke was rising from what appeared to be a large fuel tank.

The news from Tikrit and Beiji suggested that Iraq's military was starting to regain its footing after melting away in the face of a lightning advance by Sunni militants earlier this month, which saw insurgents capture Iraq's second largest city Mosul and carve out a self-styled Islamic state astride the Iraqi-Syrian border.

The United States and other world powers have pressed al-Maliki, in office since 2006, to reach out to the country's Sunni and Kurdish minorities and have called for a more inclusive government that can address longstanding grievances.

On Friday, a cleric representing al-Sistani, Abdul-Mahdi al-Karbalaie, told worshippers in Karbala that selecting the three top leaders before parliament meets would be a "prelude to the political solution that everyone seeks at the present."

The reclusive al-Sistani, the most revered figure among Iraqi Shiites, rarely appears or speaks in public, instead delivering messages through other clerics or, less frequently, issuing edicts.

Prominent Shiite leaders are pushing for the removal of al-Maliki, whose bloc won the most seats in April's elections - 92 out of the legislature's 328 - but who has been widely accused of monopolizing power and alienating Sunnis with a heavy-handed response to years of militant violence.

Even al-Maliki's most important ally, neighboring Iran, is said to be looking at alternatives.

A senior Iranian general who met with Shiite politicians in Iraq during a 10-day visit this month returned home with a list of potential prime minister candidates for Iran's leadership to consider, several senior Iraqi Shiite politicians who have knowledge of the general's meetings told The Associated Press on Thursday.

The general, Ghasem Soleimani, is expected to return within days to inform Iraqi politicians of Tehran's favorite, they said, speaking on condition of anonymity to discuss the internal deliberations.

The U.S.-based Human Rights Watch meanwhile said militants from the Islamic State killed between 160 and 190 men in two locations in Tikrit between June 11 and June 14.

"The number of victims may well be much higher, but the difficulty of locating bodies and accessing the area has prevented a full investigation," it said.

The Islamic extremist group posted graphic photos on a militant website earlier this month that appeared to show fighters loading dozens of captured soldiers onto flatbed trucks before forcing them to lie in a shallow ditch with their hands tied behind their backs. A final set of photos shows bodies.

Chief Iraqi military spokesman Lt. Gen. Qassim al-Moussawi confirmed the photos' authenticity on June 15, after they first surfaced, and told the AP at the time that an examination of the images by military experts showed that about 170 soldiers were shot to death after their capture.

Captions on the photos showing the soldiers after they were shot say "hundreds have been liquidated," but the total could not be verified.

The massacre appeared to be aimed at instilling fear in Iraq's demoralized armed forces as well as the country's Shiite majority, whom the Islamic State views as apostates.

Human Rights Watch said that using satellite imagery from 2013 and publicly available photos taken earlier, it was able to pinpoint the site of the killings in a field near a former palace of the late dictator Saddam Hussein, next to the Tigris river.

It said satellite imagery of the site from June 16 did not reveal bodies but showed indications of earth movement consistent with the two shallow trenches visible in the photos.